Electro-Harmonix introduces the Ravish Sitar pedal, which transforms a guitar into a sitar. A traditional sitar achieves its instantly recognizable sound through a combination of melody, drone and sympathetic strings, as well as its unique construction. Mike Matthews and the pedal wizards at Electro-Harmonix have distilled the essence of that exotic instrument into a compact, polyphonic pedal. 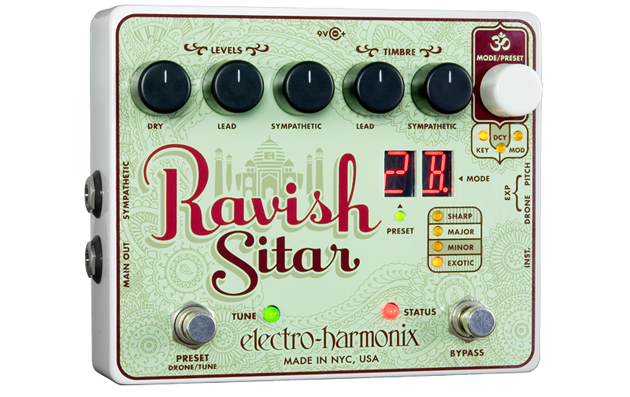 I/Os include a ¼″ Instrument input as well as two ¼″ outputs: Main Out which sums the Dry, Lead and Sympathetic voices, plus Sympathetic Out which isolates only the Sympathetic signal.

A conventional sitar is usually re-tuned for each raga that an artist performs. The Ravish Sitar enables the player to quickly choose a Sympathetic key by playing a note on his guitar, or select keys and scales for the Sympathetic strings, including major, minor and a selection of exotic scales. In addition, the Ravish Sitar allows the musician to enter their own custom scale and then save it to a preset.

Two Expression pedal inputs are also provided, one for Drone and one for Pitch. With an optional expression pedal, the guitarist can control the level of and freeze the Sympathetic strings (Drone) or bend the pitch of the Lead voice up from one semitone to a full octave (Pitch).

The Ravish Sitar comes equipped with ten factory preset programs, and a user can create, recall and store up to ten of their own programs in those memory locations.

Made in New York City, USA, the Ravish Sitar is housed in a solid die-cast package and is equipped with a standard 9.6-Volt/DC200mA AC adapter. It will begin shipping in early September 2011 with a U.S. list price of $319.