“Combining the power of analog synthesis, physical modelling and samples, through the intuitive workflow of a hardware drum machine, Spark is a highly creative beat production center.” This is how Arturia presents Spark to us. Time for Gearjunkies to take a closer look and see Arturia makes sense…. 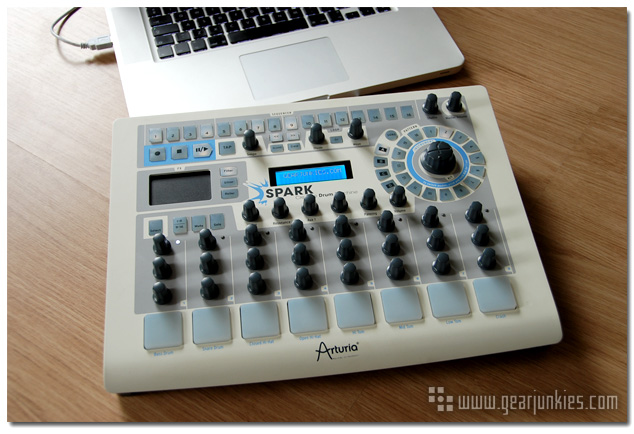 If we open the box, the first thing you see is that georgeous controller that really looks like an vintage drum computer. Just a little ‘off white’, large drumpads, 16-step sequencer, enough buttons at the top, a big rotary button, … yeah I am excited. 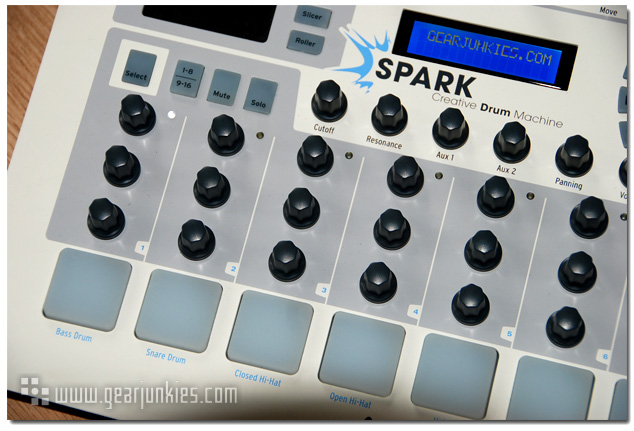 The Hardware Controller
As I took it out of the box by grabbing it at the sides, I almost broke it. Because the controller is slightly

slanted, there are, at each side, two plastic ‘feet’. These feet are made of (too) thin plastic. As I didn’t noticed them at first I almost broke them off. Is this my first point of criticism or am I just too rude? Well, maybe a bit of both, but they could have been made a bit more sturdy to my liking.

Software
Installation of the software on my studio PC (Mac OSX, 64 bit) was flawless. M-Works (Dutch distributor) pointed out that there was a software update available with lots more free soundbanks, which was nice of course. The software can work as a stand-alone application or as a plugin in your DAW. In my setup that’s Steinberg Cubase 6. If you use Spark in Cubase you have to disable Spark in your midi options first, like with both Midi IN and Midi OUT. This is obligatory or else there’s no connection between the software and the controller. If you forget to disable Spark, no worries, the machine gives a warning itself.

First try out with the Spark was in stand-alone mode. First impression was: “… what a cool machine!” Me being a bit olskool myself, I love machines with lots of buttons and stuff I can touch. The software and controller worked great. And this was also fun for me as there were lots of buttons, sequencer buttons, lit drumpads, and so on. With thirty drumsoundbanks there was enough for me to browse and play with.

Drumsounds
With these drumbanks there are enough sounds for everyone. Pop, rock, dance, electronic, … you name it! You’ll find old friends here as well. The 808 and 909 are present of course, as are the Simmons and Linndrums. But there’s more, not only drumsounds are packed with Spark, you’ll get bass and lead sounds as well. Maybe not enough to create a complete song but lots of sounds to create a nice basic  groove with. A comparison with NI’s Maschine is quickly made of course. However, personally I’d prefer the Spark machine for its drumsounds. And that’s exactly what it is, a drummachine. Where the Maschine from NI is more like a general groovebox.

There are two ways to program your drums, … well actually three. First with just the controller, second with just the software and third software and hardware combined together. To me the most fun was with the (hardware) controller. Select a drumkit with help from the displays and off you go. With the eight pads you can preview the selected sounds. Each pad has three rotary buttons with which you can set your sound individually (tuning, decay and tone). 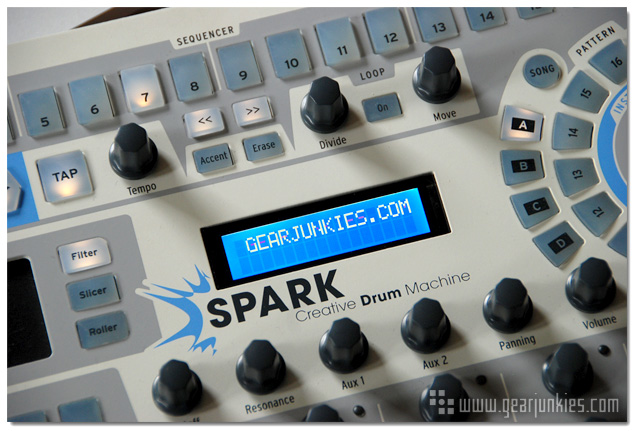 A groove can be programmed easily with the sixteen step sequencer. The sequencer is located at the top of the controller with sixteen press buttons. In total you can create a groove of 64 steps. A groove can consist of multiple drumsamples of course, just select your samples with the big rotary button. Tempo can be set together with a ‘swing’ function to make it even more … groovier! 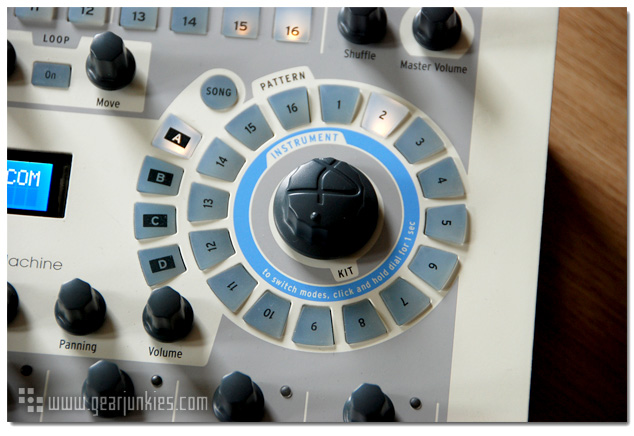 This way you can also creat fill-ins and grooves for a drum arrangement. In your DAW this can be automated. Using Spark live you can choose another pattern which will start when the previous pattern ends, as it should!

With that big rotary button in the ‘pattern circle’ you can easily scroll through your grooves, samples and drumkits. Found a kit you like? Press the button and it will load into the controller. Nothing will change in the pattern. You can just change your samples and sounds without losing any creativity.

I wasn’t really blown away by the drumkits to be honest. They aren’t bad, but they weren’t impressive. Personally I don’t see the value of the acoustic drumkits for example. However, that’s a personal opinion. If you prefer your own sounds, Spark can load your personal samples, MIDI and REX files, so you could create your personal drumkits with your personal sounds!

After you have programmed your drum pattern, it is easy to edit them with effects and filters. The Spark has rotary buttons for cutoff, resonance,panning and volume. There are also two AUX rotaries for routing your effects. Next to these rotary buttons there is a small touchpad where you can select your filter, slicer and roller directly and use on your drums. Needless to say that these functions all can be controlled and recorded via MIDI. 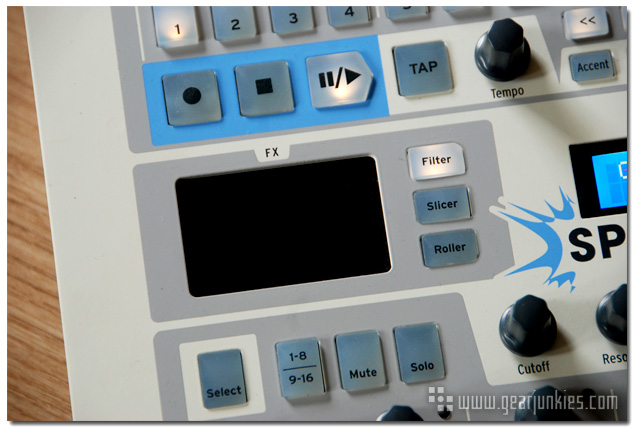 The Software
The Software shows three screens. At the top you’ll get the 64 step sequencer, in the middle there is the controlelr view (the Spark controller), and at the bottom, the third screen, there’s your library. All screens speak for themselves actually. The software is logically set up. Everything is right there where you expect it. The respons is fast. During my time with the Spark I programmed my drums on the hardware and went into the software to ‘fine tune’ everything to my likings.

MIDI Control
Spark is also a MIDI controller, next to being a drummachine. It ships with a MIDI Control Centre Application Software which gives you control over any third-party software or hardware. There is even a specific Ableton Live template available. I haven’t tried this out however. If anyone did? Let us know in the comments below.

Verdict
All of the above is Spark in a nutshell. I have to admit, along the way I really started to appreciate this controller/drummachine. When Spark was announced and I saw the first pictures I wasn’t really that impressed. When I heart it was only intended for drums and beats I was even less impressed as for example NIs Maschine is used for complete music production. Maybe this opinion is a little biased as I am a big Maschine fan.

But after working and playing with Spark for a while I noticed I was building my drums in a different way in my music productions. Another positive fact is the speed with which you can ‘lay down’ a beat during the composition time is very nice. Before I made a pretty standard loop and programmed and arranged my drums afterwards. But now, with the use of Spark I get closer to a final sound, with much less altering afterwards. But if I need to, changing drums is easy and lightning fast.

So it’s all good? No, not everything of course. The controller doesn’t feel solid/sturdy and a longer USB cable would have been nice. But even that aren’t the biggest problems. I was quite disappointed by the actual drumsounds. To me they missed some ‘oooomphh’, some body. They could use some more quality to be honest. I tried some samples and loops from Loopmasters and Sample Magic, and I immediately noticed a big difference. I instantly got a more dynamic, bigger, fatter sound. So I think Arturia could make some improvements at this end. Again, I am definitely NOT saying they are bad, but they won’t convince you of the strength of the Spark in other fields.

The retailprice of the Spark is around 499 Euro. I have to say that’s a bit on the high side. Yes you’ll get a MIDI controller too, next to a drummachine, but I am pretty sure that people will only use the hardware controller for the Spark software. The strength of the Spark is being a drummachine and not a MIDI controller for third party software. Because, when you look at the price, for 75 Euro more you’ll get MASCHINE with a more elaborate software for a complete music production system. The MASCHINE MIKRO will become probably even a bigger competition.

But, … I have to stop nitpicking, as the Spark is a lovely product from Arturia. Users will have enough potential to work with it for years. It is a great drummachine and the controller still looks damn fine and hot. And lets not forget it works fantastic and flawless.

I want to thank M Works for giving us the opportunity to play with the Arturia Spark.