A Midas PRO6, supplied by Britannia Row Productions in Europe and Delicate Productions in the USA, has gone out for the first time on monitors on Foo Fighters’ world tour in support of their seventh studio album, Wasting Light. The tour kicked off in Tulsa, Oklahoma in May, taking in over 60 dates across North America, Europe, and Australasia, and with new dates still being added, will continue into 2012. 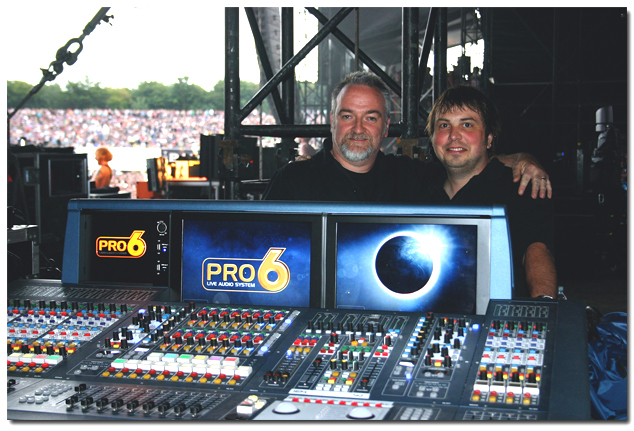 Monitor engineer Ian Beveridge, who has worked with Foo Fighters for some 17 years, has long been a Midas fan, and faced with the formidable schedule of the current tour, he decided to opt for the smaller footprint of a Midas digital console. To his delight, he has found that he can take advantage of the conveniently compact size of the PRO6 without sacrificing anything in sound quality. “It’s the best sounding console I have ever used, bar none,” he enthuses. “The band themselves commented on the sonic improvement the moment the PRO6 arrived. Their latest record was made without any computers at all; it’s five guys with five instruments on the record and live, and the sound of the PRO6 complements this approach perfectly.“

Beveridge is enjoying the versatility and sound quality of the PRO6, citing user-friendliness of the POPulation groups and the storage capacity of automation and show files as particular standout features. “I use the automation very simply, making only one scene per show and perhaps a scene for guest musicians that require any big changes,” he says. And there has been no shortage of high calibre guests: Bob Mould, Lemmy, Rodger Daltry, Brian May, Rodger Taylor and Alice Cooper have all already appeared with the band on this tour.

Beveridge is also a big fan of the console’s patching flexibility. “It’s an extremely powerful tool that allows me to do the very best I can every time the Foos walk out on stage,” he says. But he reserves perhaps his highest praise for the PRO6’s dynamics. “They are superb, and allow me to control or amplify transients with a terrific level of transparency,” he says, adding that the PRO6 also offers all he needs in the way of onboard eq and dynamics, and singling out the channel gates and comps as “outstanding.”

For recording the shows, Beveridge has teamed the PRO6 up with a Pro Tools system via a Klark Teknik DN9650 network bridge, fitted with a MADI card.