Electro-Harmonix introduce two new effect pedals. The new Analogizer is an effect pedal designed to warm up the harshness of a digitally processed guitar, or for thickening up an already warm sound. It provides the organic tone and feel of an analog delay, without the long delay times. The Switchblade+ has a fully passive audio path and active LED indication, this new pedal offers a handy solution to a player’s switching needs. This pedal allows a musician to switch his signal between two different locations (A or B). This permits toggling between two amps, two effects chains or two speaker cabinets. The pedal also enables the player to send a signal to both destinations at once, i.e. A and B.

The Analogizer features four controls: Gain, Spread, Blend and Volume. The Gain control allows a user to boost their input gain up to +26dB which can be used, for example, to make a solo stand out. Spread controls the delay time of the Analogizer from 3.5 mS to 65 mS. Adjustments in the lower-half of its range provide tonal variations in the effect. Adjustment in the upper-half can be used to thicken up a player’s sound. Blend enables a guitarist to mix their direct and effected signals from 100% dry to 100% wet. Volume controls the pedal’s output level. 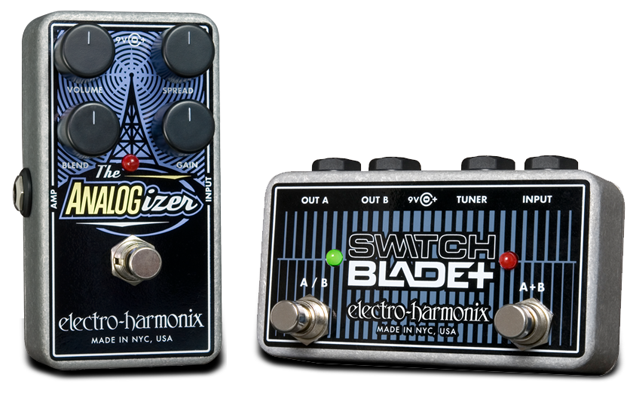 To further enhance its utilitarian role, the Switchblade+ provides a dedicated output which can be used for a tuner or other effects pedals. This Tuner output jack is hardwired to the Input jack and provides a direct output regardless of the state of the unit.

The Switchblade+ is shipped with a 9 Volt battery that provides power for its indicator LEDs. It can also accept an optional 9VDC battery eliminator such as EHX’s 9.6DC-200BI. Since the audio path of the Switchblade+ is fully passive it will work without power, however, the LEDs will not function.

Housed in a solid die-cast package, with a 4.37″ long by 2.37″ wide footprint, the Analogizer is equipped with a 9V battery and can also be powered by an optional 9.6V/DC200mA AC adapter. The Analogizer will be shipping in late November with a U.S. list price of $139.80

The new Switchblade+ is housed in EHX’s rugged, cast NANO package. It carries a list price of $63.20 and will begin shipping late November, 2011.