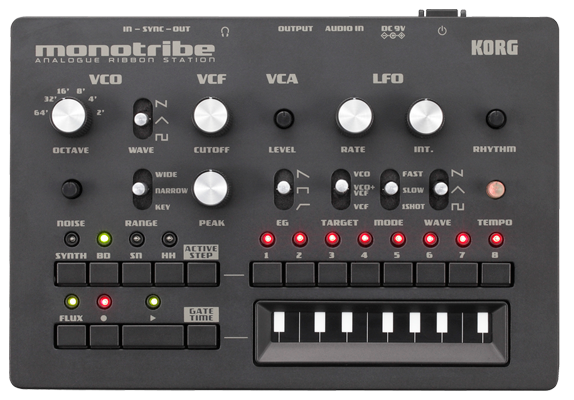 The monotribe Version 2 adds a plethora of new features, allowing you to create sequences that are even more elaborate, or to layer complex musical developments for extended performances.

Surely one of the most exciting additions is a new synchronized performance mode that allows for new type of performance using multiple monotribe units. Whether you’ve never touched a monotribe or whether you’re an expert who is thoroughly familiar with all of the current features, this new update guarantees that your analog groove-making will be more intense than ever before!

16-Step Synth parts
As with drum parts, the synth part now provides timing information in between the steps in a sequence, allowing a pattern to achieve a total of 16 steps.

Synth Part Volume Automation
Volume Automation allows the synth volume to be recorded during playback to create more detailed sequences. The left side of the ribbon controller keyboard decreases the volume, and the right side increases it. This Volume Automation can even be controlled when if Flux mode is on.

Sample & Hold (S & H) added to the LFO
The newly added S&H function is indispensible for creating mysterious analog synth sound effects. The RATE knob adjusts the frequency of change, and the INT. knob adjusts the depth of change.

Drum Roll capability
A roll can now be added to the desired drum part. The speed of the roll can be controlled using the ribbon controller keyboard; moving toward the right will increase the number of strikes. You can also record the drum roll using the sequencer to intuitively create subtle and dynamic drum patterns.

Linked Sequences play multiple monotribes in rotation
The Link Sequence feature is a completely new sync method that vastly expands the scope of the monotribe, to deliver even more fun. When sequence playback reaches step 8, the sequence will automatically stop and the next monotribe unit will start playing. By loop-connecting the SYNC jacks, the playback can keep cycling through multiple units – in true modular fashion!

New Additions
The Gate Time Hold function lets you use the ribbon controller keyboard to play and record new pitch information while retaining the gate times recorded in the sequencer. Also new is the Half Tempo function, which cuts the tempo in half when synchronizing to an external input from the SYNC IN jack. In addition, there are now four shortcut keys that instantly initialize various types of sequence data or active step settings.

Updating Procedure
Thinking of monotribe as an analog synthesizer, the procedure of for updating the Operating System is also a very old-school, analog-style method, reminiscent of loading data via the playback of analog cassette tape. Simply download the system data which Korg has encoded as an audio (WAV) file from www.korg.com or from the website of your local Korg distributor. Then, play back the file using a WAV file player like a Smartphone or using PC application software, directly in to the monotribe’s SYNC IN jack. When the audio (WAV) file finished playing, your monotribe has been updated. It’s a traditional procedure revived for a new generation!

WARNING!
Do not playback the system update file on any speaker or headphone system as this could lead to damage to equipment and/or hearing loss. Neither Korg nor any of its affiliates will accept responsibility for any damages, personal loss or injury that may result from playback of the file.