Korg announces the Mini Kaoss Pad 2 Dynamic Effect Processor. It offers a familiar Kaoss interface and real-time fingertip effects, packaged in a compact body with battery operation for shirt pocket portability. The new Mini Kaoss Pad 2 is ideal for DJ club performances and for use with a variety of musical instruments, home studio applications and portable audio players. 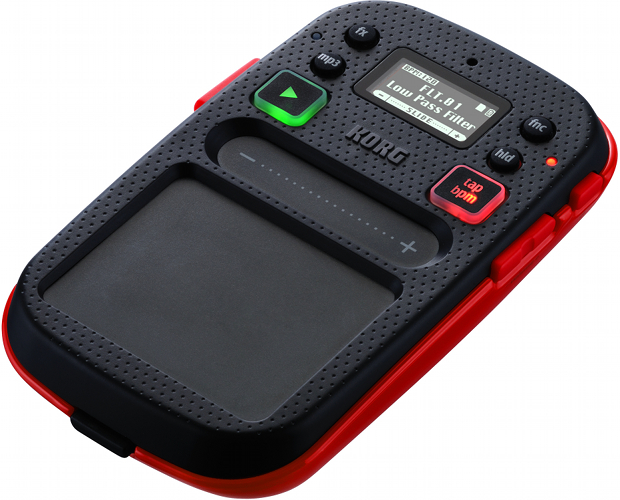 Following in the footsteps of the Kaoss Pad KP3 and Kaoss Pad Quad, the Mini Kaoss Pad 2 is played by sliding or tapping a finger on the X-Y touchpad. These finger motions allow multiple effect parameters to be easily controlled at the same time.

The Mini Kaoss Pad 2 offers a sleek new design with ergonomic styling, a high-visibility organic electroluminescent (OEL) display, a built-in microphone, an 1/8″ stereo input to accommodate nearly any audio source, an internal speaker, battery power and a number of advancements over the original MiniKP. These enhancements include an MP3 player, FX Release, and microSD storage capabilities.

For live performance, the Mini Kaoss Pad 2 provides three Program Memories for instant recall of any favorite effects. The Hold function freezes the effect parameters at their current location on the touchpad for hands-free operation. Auto BPM detection syncs tempo-based effects to the tempo of the song, so that everything continues to move in sync for a professional performance. The FX Release automatically adds a delay effect when all fingers leave the touchpad, so that the effect blends smoothly into the song or performance, avoiding abrupt effect dropouts.

The audio output  (1/8” stereo) can double as a headphone output. The energy-efficient design allows the Mini Kaoss Pad 2 to operate everywhere on just two AA batteries. Six audio examples are stored in memory for demo use.

Mini Kaoss Pad 2 Dynamic Effect Processor and MP3 Player will costs $220.00 and will be availible in May 2012