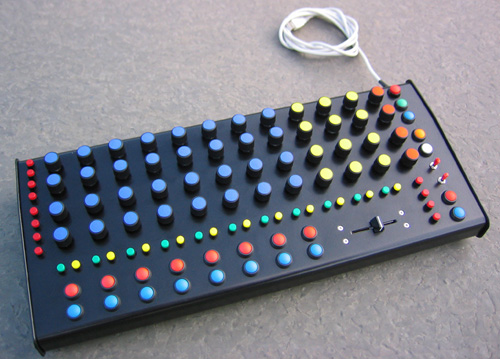 Construction
The MIDI data itself is produced by four Doepfer PCBs and transmitted via USB using an Evolution converter. A minimum of three MIDI channels are occupied by unItOne. unItOne is mains powered via an external 7.5V supply. The case is aluminium and it weighs about 1.75kg, (4lbs).

Messages and controls
In this particular unit the encoders produce increment/decrement messages, the switches and buttons give note on/off messages and the crossfader outputs values in the range 0-127. The lines of small red buttons are used to switch blocks of encoders between different banks of CC numbers and these red buttons light up to indicate the bank selected. A total of 242 DAW parameters can be controlled using the 192 MIDI controller messages and 49 MIDI note on/off messages available, plus the crossfader. 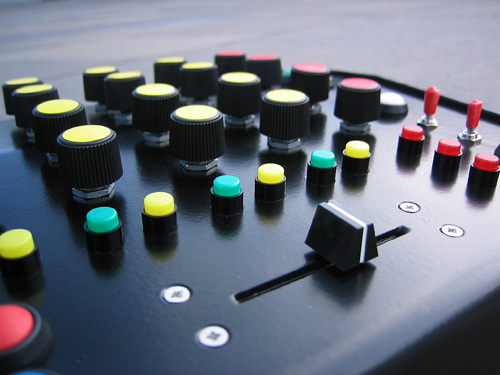 In use
With the exception of the crossfader the control value is shown in the software not on the unit, i.e. the encoders have no detent position, no scale or indicator marks on them and the buttons are of non-latching and un-lit type. This prevents organisational difficulties when switching between programs and projects with different initial control settings as the encoders simply increase or decrease existing values and buttons toggle the existing control states. The bank change buttons are lit but they do not transmit MIDI and so cannot have a counterpart in the controlled software.

Customisation
However, at the assembly stage unItOne can be configured to output many different types of MIDI data from the encoders by adjusting the jumpers on the circuit boards themselves. Alterations to the crossfader function are also possible at the assembly stage. Due to the design of the circuit boards the buttons output MIDI Note On/Off data for their respective notes only. There is no Velocity or Aftertouch for example. However through the selection of buttons with exotic latching/signal patterns complex variants of this simple behaviour are possible – but driven from the switch side.

More customisation
But that is just the start. The characteristics of each control can be fine tuned to the users’ preference using real time MIDI processing software such as Building Blocks. Examples include adjusting the crossfader curve, making buttons cycle through 3 or 4 different actions (rather than simple on/off) and making controls in your DAW more or less sensitive. Powerful stuff!