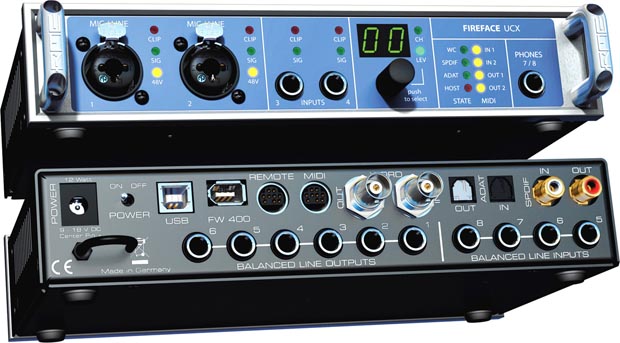 The Remote Control Edition of the Fireface UCX will be available until the Standard edition starts shipping.

More about the Fireface UCX:

The Fireface UCX is a highly integrated 36-channel USB and FireWire pro audio solution in an ultra-compact format, for studio and live recordings.

It continues RME’s long tradition of designing compact high-end interfaces, packing into a half-rack size unit what usually would be spread out over two or three 19 inch panels. RME once again has put the latest technologies, introduced with the award winning flagship UFX, plus a bunch of newly developed ones, into a half 19 inch housing with full mobile usability. The result is not just a smaller version of the smash hit UFX – the UCX continues the tradition of RME’s tremendously successful compact interfaces, and combines it with the great usability of the successful Babyface through the optional remote control.

Equipped with a new 2011 A/D and D/A high-performance converter design all I/Os operate at up to 192 kHz. The AD/DA conversion shines with an impressive 114 dBA dynamic range on both record and playback. All analog I/Os use a low latency converter design that reduces the overall latency of timing critical applications, in live situations, and in computer-based recording studios. The converter latency is so low (0.4 ms at 48 kHz) that it can be ignored, turning analog digital monitoring into real analog-style monitoring.

The Fireface UCX integrates a newly developed pro audio X-Core, supporting USB and FireWire with the maximum performance and ultra-low latency operation, combined with the legendary RME driver stability and maintenance, on both bus protocols.

•  TotalMix FX with the complete DSP-driven effects engine from the Fireface UFX, including all effects up to 192 kHz.

•  Two mic preamps with the premium technology from RME’s high-end recording bestsellers Micstasy and UFX, including the AutoSet overload protection.

•  Included Monitoring Controller: A combination of the impressive flexibility of the TotalMix FX monitoring tool set and the optional Advanced Remote Control.