Zynaptic announced the introduction of UNVEIL, a real-time de-reverberation and signal focusing plug-in for the Mac OS X AudioUnits (AU) format.You can meet Zynaptic at their booth at the Frankfurt Musikmesse, Hall 5.1 Booth A91. 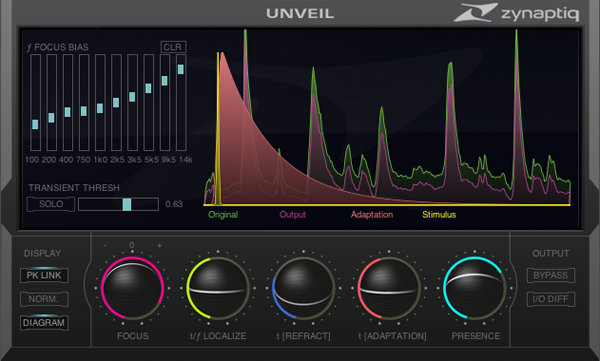 UNVEIL is a real-time, de-mixing based plug-in that allows attenuating or boosting reverb components within a mixed signal of any channel count, including mono sources, as well as modifying contained reverb characteristics. Additionally, UNVEIL allows bringing the key features of a recording into focus, or moving them to the background, by attenuating or boosting perceptionally less important signal components.

– Audio engineers can attenuate reverb in recordings, gaining flexibility both in microphone placement as well as mix-down.
– Film mixers and dialog editors can remove reverb from dialog and location sound, reducing the need for dialog replacement and foley, and match reverb amounts across different takes or perspectives.
– Music producers can turn drum-loops rich in reverb into dry recordings, and vice-versa.
– Sound designers and foley artists can remove reflections and ambience from sub-optimally captured sounds.
– Mix and mastering engineers can bring key mix elements into focus by attenuating components commonly referred to as “mud”.

The UNVEIL real-time features at a glance:

– Attenuate or boost the level of reverb components in mixed signals.
– Modify reverb characteristics within a mixed recording.
– Bring key features of any signal into focus by attenuating perceptively less significant components.
– Works with any sample rate and channel count, including mono sources.

UNVEIL will be demonstrated at their booth H5.1 A91 at the Frankfurt Musikmesse, March 21st until March 24th, and they will hand out personal discount vouchers for both UNVEIL as well as their polyphonic pitch processor PITCHMAP to guests.

UNVEIL as well as a free trial will be available from the Zynaptiq website Monday, March 26th.

UNVEIL comes as Mac AU (AudioUnits) Plug-In, with VST and AAX support for both Mac and Windows platforms planned for later in 2012.