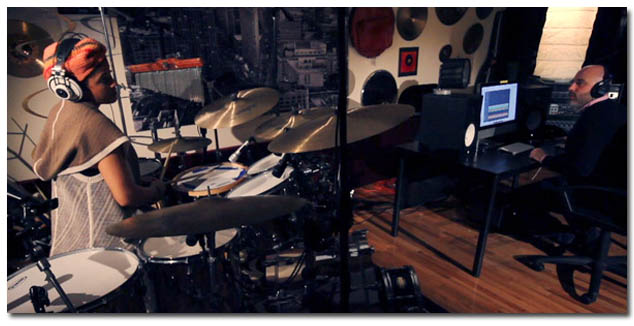 To record drums, Kimberly uses the Focusrite Liquid Saffire 56 and a pair of OctoPre MkII Dynamics to provide a total 24 channels of high-quality preamps and A-D conversion, as well as a pair of studio-grade headphone outputs, which can be fed different mixes through the included Saffire Mix Control software.

Nino (producer) put the Focusrite rig together for Kimberly’s space. “She hit me up and said ‘hey, I gotta figure out how to record these drums’, and I found the OctoPre MkII Dynamic and knew it was going to solve the problem. I’ve got compressors on every channel and I was like ‘yes!’. If you’re doing R&B or pop music, you need to have a very clear signal, and what I like about the preamps is that it’s very warm and round, so your top end is very round, it’s not jagged. That’s what attracted me to the Focusrite mic pre.”