Siesta Submarina is one of the more interesting contemporary techno acts that have emerged from Norway. His live sets are techno in the truest sense; deep, evolving, mechanic and yet strangely human. Improvising when performing, while always keeping a keen ear on detail and rhythm, are inspiring trademarks of his. 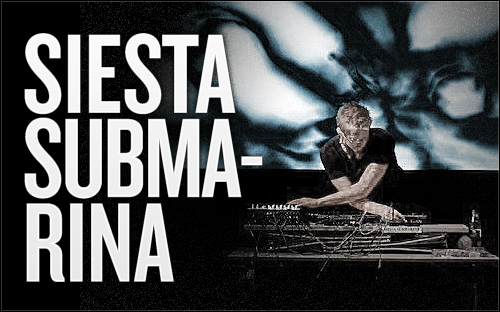 You play out quite a lot. To what extent are your live sets improvised? Are you able to adapt your sets to the mood of the audience?
Ever since I started playing live I’ve tried to balance between the planned and the improvised. I do use the same patterns and kits, but reading the audience and trying to adapt is the key element to the improvisational part, which is where all the fun is at. Actually, last Saturday I played as the last act of a mini-tour I’m currently doing together with Christian Tilt and Thomas Danger (two of Norway’s finest techno artists by the way…), and Christian ended in such an upbeat, dancy way that I just scrapped the planned atmospheric intro and went straight into the mid of my set. From there I could just stretch out each groove to fill the playing time, and it worked really well. Two weeks earlier we played in my home town and I played first, using mostly the same patterns but in a much more atmospheric and progressive way.

This is why I love the Elektron machines, and the Machinedrum UW in particular, because they are so physical and intuitive. They make it easy to shape the overall sound in response to the audience. Sometimes a two-minute glitch-out using the Function + knob tweak feature can make magic moments happen, especially if the audience is up for it. My current favourite “trick” is to create ridiculously big builds using a dedicated reverb track and the Function + knob tweak combo, glitching out everything, thinning out the bass, sending everything into the reverb and increasing both reverb time and level to max. Now it’s all a fog of reverb and you can barely feel the rhythm anymore. Then I hit Function + Extended, reverting back to the “original” state of the kit… The impact can be incredible, and it works so well because it does not sound anything like the traditional “rising white noise + taking out the bass with the mixer before the drop” technique that it so overused in modern techno and tech-house music. These kinds of unique Machinedrum tricks is what makes it so well suited for improvising. Getting my fingers into the action and trusting my intuition has been really rewarding.

Which sonic elements do you consider the most important when you create a song?
This is a tough one. I use the experimental method most of the time, in that I rarely have more than just a certain mood in mind. If I want a dark and heavy sounding track I usually start with shaping the bass drum and bass line combo, adding some eerie, pitch-bending filtered stuff with loads of reverb and delay etc. If I want in-your face techno I try to balance the energy of the hats and rides. An onslaught of frenetic, but distinct, highs just has so much energy that it needs to be pinned down. Then semi-melodic percussive elements; another favourite on the Machinedrum. I love making pitched melodies with both on board machines and percussive samples, and I spend a lot of time shaping these sonically. LFO’s everywhere! Basically I try to fill the audio spectrum so that each part can easily stand out.

I have one track in the live set with six bass tracks all sequenced differently and with different filter settings. Everything becomes just one big, moving bass-drone. It’s maybe not a good general mixing technique, but it works for that specific track!

I also spend a lot of time with the MD master effects, since I do not use any outboard effects in my tracks. Most of them are pure Machinedrum UW, sometimes I let the Monomachine in, but my liveset is 100% Machinedrum, with the Octatrack on live resampling and transitional duties only.

What are the most valuable producing lessons you have learnt during your career as a musician?
I’d say spending lots of time making small edits to each sound has been more rewarding than I first thought. When I started out I spent my time trying to make each part sound louder than the others, which just led to a mess of sounds. By spending more time placing each track in its own audio spectrum the tracks sound much more “full”, I guess that is the most valuable part. Also, learning to trust my monitors even if things sound good enough in headphones was a wake-up call for me. Because what happened was that when I got to play out, it didn’t sound like in the headphones, it sounded like the monitors… obviously! And by hearing my tracks on good sound systems helped me realize what needed more attention. Comparing the sound of my own tracks to tracks from artists I admire and want to sound like is a good way of learning too, even though 95% of the time I get disappointed, because let’s face it, I’m not exactly Luke Slater here… 😉

Are you working on new material?
I think I’ve made music every day for the last two years. In fact, only during the last three weeks I made about an hour worth of brand new live material for the mini-tour, some of it was picked up by one of the labels I’ve released on earlier and will be out some time after the summer. I also just managed the deadline for a compilation on Aquavit Records (where also a fellow Machinedrum user Nils, aka Pokelok, released his debut), which is the label where I released my debut EP last year. I am also very excited to say I have an upcoming release on the Detroit-based BWLR label. The material will consist of two original tracks plus remixes from some of my personal heroes Christian Tilt and Highsage, where the latter is a name any Machinedrum user should recognize.