Native Instruments today introduced THE GIANT, a new instrument based on the world’s biggest upright piano. For use in KONTAKT 5 or the free KONTAKT 5 PLAYER, THE GIANT features the intense sound of the Klavins Piano Model 370i, a super-sized instrument delivering a colossal sonic spectrum equally well-suited to urban pop projects, soft piano ballads, driving rock riffs and jazz numbers, as well as providing a separate ‘Cinematic’ version of the piano for darker, atmospheric projects and sound design. 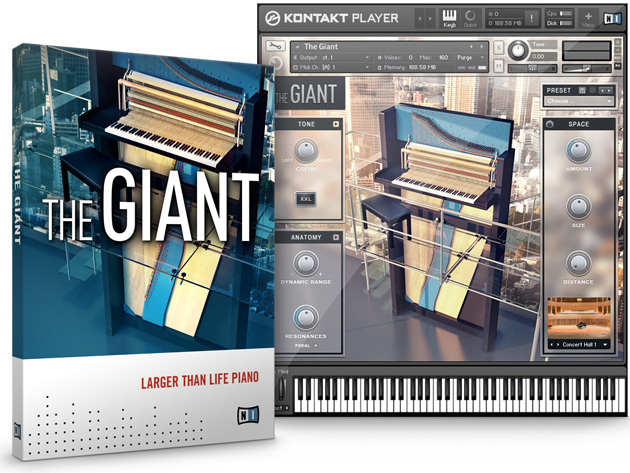 Produced by sampling expert Uli Baronowsky, the creator of the ‘Galaxy’ piano series, THE GIANT captures the sound of the original instrument in meticulous detail. This upright piano stands over three meters high and weighs over two tons, with a soundboard roughly twice the size of a typical 9′ concert grand piano soundboard. Its unique sound forms the core of THE GIANT, which complements the dynamic and authentic playability of the original with powerful controls for shaping and modifying the sound. Additionally, 40 production-ready presets provide instant starting points for numerous musical styles.

THE GIANT comprises two separate instruments in one, each with its own graphical user interface and detail controls. While the versatile piano sound of the ‘day’ version is suitable for a wide range of styles and genres, the ‘night’ version turns THE GIANT into a cinematic tool suited to atmospheric scores, sound design and avant-garde productions. With ‘Tone’, ‘Color’ and an XXL button, the ‘day’ instrument provides three basic control sections for adding sustain, space and character to the sound. The ‘night’ instrument includes unconventional, individually-sampled sound sources including overtones, resonances, plucked strings, release sounds and special techniques such as piano hits, kicks, sweeps or scratches. The physical elements of the instrument, including dynamics, tuning, noises, overtones or stereo image can be conveniently controlled via the ‘Anatomy’ parameters.

Additional information on THE GIANT is available at
www.native-instruments.com/thegiant