Almost at the same time as the release of the 2.2.1 update of Serato’s Itch, Vestax released their VCI-380 DJ Controller. The VCI-380 is a two channel DJ controller with a built-in Digital DJ mixer, powerful and creative, opening the door to limitless possibilities of controllerism. Mix, scratch, cue, effect, sample, trigger, loop and slice. 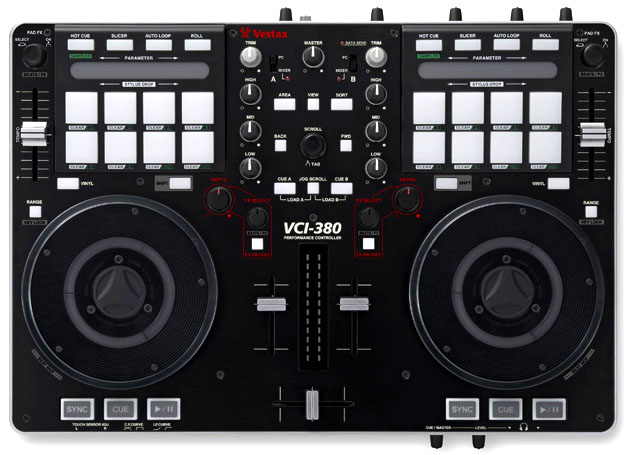 Every feature of the VCI-380 is optimized to enhance the DJs performance and take a new approach in manipulating music. Designed hand in hand with Serato, VCI-380 is bundled with ITCH, providing an arsenal of musical craft tools with perfect integrity, straight out of the box.

Controllerism is the art and practice of using musical software controllers (e.g. MIDI, OSC, Joystick, etc) to build upon, mix, scratch, remix, effect, modify, or otherwise create music, usually by a Digital DJ or “Controllerist”.
The term was coined by Moldover in 2007 and popularized by Ean Golden to describe the process while paying homage to and giving respect to the art of turntablsim. (From Wikipedia, the free encyclopedia)

EVERYTHING IS AT YOUR FINGER TIPS
The 2 x 8 banks of FSR trigger pads on the VCI-380 are jam packed with creative Performance Modes such as the Slicer, Roll, Sampler, Loop, Hot Cue and Pad FX. With the given features you can trigger cue points, samples, loops, slice up beats, and shoot off Pad FX together.
Pad FX creates amazing combinations to manipulate music in ways nobody else has before: holding each pad (aftertouch) will modify the FX parameter, along with triggering Performance Mode functions.FX are an

essential tool to spice up your performance; in addition to Pad FX, each deck features classic FX controls.The Ribbon control on each deck alters the parameters of Pad FX, swipes, holds and needle drops tracks.

ULTRA-STABLE  PERFORMANCE
The legendary jog wheels from the Vestax VCI series have stepped up in their game with an advanced structure and larger platters for extra stability and smoothness. The platters of the VCI-380 are highly responsive, transmitting MIDI signals with extreme accuracy. The LED needle point embedded in the jog wheel provides excellent visual monitoring, indicating the decks playback position.  The torque of the jog wheels can be adjusted to your preference, and as like all VCI series controllers you can pitch bend the track by touching the sides of the jog wheels.

STAND ALONE MIXER
The stand alone mixer function of the VCI-380 has great capacity for adaptability. The two hybrid channels are capable of mixing external devices such as CD players, turntables and MP3 players, together with tracks and samples Serato ITCH is playing. Each channel has an RCA Phono/Line input for limitless connection options, and the crossfader and input faders curve can be adjusted like any DJ mixer.  Mixes with the input source can be tweaked with Trim, EQ and in addition, the FX knobs on each channel function as Hi-Pass filters, to add an extra touch to your performance.

Designed hand in hand with Serato, the VCI-380 takes perfect control of Serato ITCH and its outstanding features. The extreme integrity between the VCI-380 and Serato ITCH provide and arsenal of music craft tools which will inspire controllerists and DJs of all kind.