Hoobastank drummer Chris Hesse pounds tracks with HAMMER and NAIL. Hoobastank recently put the finishing touches on its highly anticipated new record, Fight or Flight, which makes its official debut in late August. Nearly two years in the making, the album was partially tracked at Woodland Hills-based studio The Lighthouse, owned by Hoobastank drummer Chris Hesse, who found frequent opportunities to use his A-Designs HAMMER equalizer and new NAIL compressor. 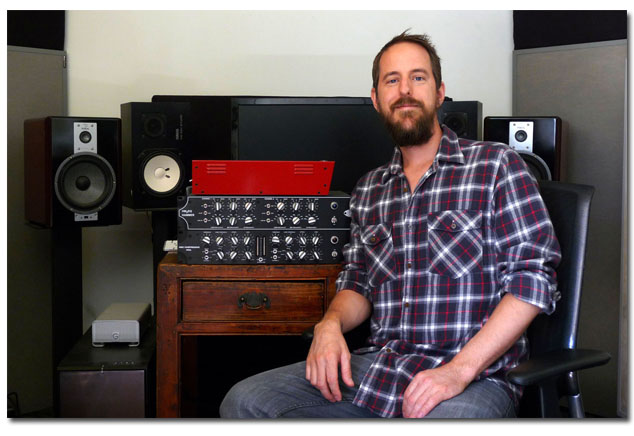 Although a fair amount of the new record was recorded at producer Gavin Brown’s studio in Toronto and mixed by Paul Hager in Burbank, Hesse points out that the band tracked guitars, bass, keyboards and many of the album’s vocal tracks at The Lighthouse, while some of the drum tracks were laid down at his old house in Malibu.

“My friend, Peter Stengaard (producer at Diane Warren’s RealSongs Studios), owns a HAMMER and NAIL and has raved about them for a long time, and now I know why,” says Hesse. “I really like using the HAMMER for tracking overheads and especially vocals. When mixing, I’ll use it for pretty much anything because it’s a no-brainer for breathing life into tracks. It’s an impressive piece–so much so, in fact, that I sold my previous main stereo tube EQ to buy it, and I still had a load of dough left over for other gear.”

“I didn’t actually get the NAIL until recently, but I instantly fell in love with it, too. It’s fantastic across the mixbus–almost as if there’s an EQ hidden in the product because simply running things through the NAIL gives mixes added air. It polishes things so nicely that I’m not at all inclined to go exploring other avenues at this point.”

Hesse also appreciates his A-Designs REDDI tube direct inject box, which he purchased with his HAMMER last year. “I bought the REDDI sight unseen and I’m so happy with it. I’ve never heard someone say that they tried one and didn’t like it. Quite the contrary, everyone that has used it swears that it’s the best DI they’ve ever heard. It fattens the hell out of a signal and sounds simply amazing, somehow simultaneously rounding out the bass and extending the highs. And although it certainly excels at bass, it’s not a one trick pony. It makes anything with a 1/4-inch cable output sound incredible. I’m convinced it’s fueled by pixie dust!“

Although the new record isn’t scheduled to drop until August 28, the group has already released its first single, This is Gonna Hurt, to radio stations around the globe. For more information on Chris Hesse and Hoobastank, visit the band online at www.hoobastank.com.