Till the end of this year you’ll have the opportunity to order Minimoog Voyager from the Select Series. Because today Moog Music announced its plans to discontinue production of the Minimoog Voyager Select Series, the top selling backlit analog synthesizer of all time. Over the last six years the Select Series has been used in studios and on stages around the globe. Whether it’s Madonna, Dr. Dre, Alicia Keys, CeeLo Green, Lady Gaga or Sugarland, the custom combinations of color and finish reflects the unique aesthetic and personality of its owner. 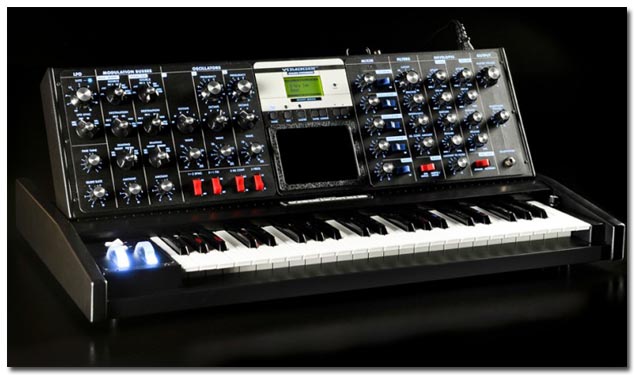 “We felt it was important to give musicians who had always dreamt of customizing a handcrafted Voyager a final chance to build one at an unprecedented price,” said Mike Adams, CEO Moog Music Inc. “We are a small company that still builds by hand, so sometimes we have to make hard decisions about ending the life of even our most favorite products. However, history has shown that discontinued Minimoogs, like the Model D and the Old School, have a tendency to become highly sought after collector’s items. I’m sure we’ll see them on stages and in studios for years to come.” said Adams.

The discontinuation of the Select Series comes just as Moog begins celebrating the 10th Anniversary of the Minimoog Voyager. The first Minimoog Voyager introduced the world to the next generation of analog synthesizers in 2002. To honor this milestone, Moog has created an interactive ten-year retrospective containing the untold history of the Voyager, artist profiles and performances, free gifts, and other announcements that are yet to come.