Our friends at Koma Elektronik have a new product in development. It will be named KONTROL SURFACE and it is a two-axis touch screen controller. On release there will be two versions, Pro and Light. Both units will be on display and ready for a thorough test drive at NAMM 2013 and will be shipping in the end of Q1 of 2013! 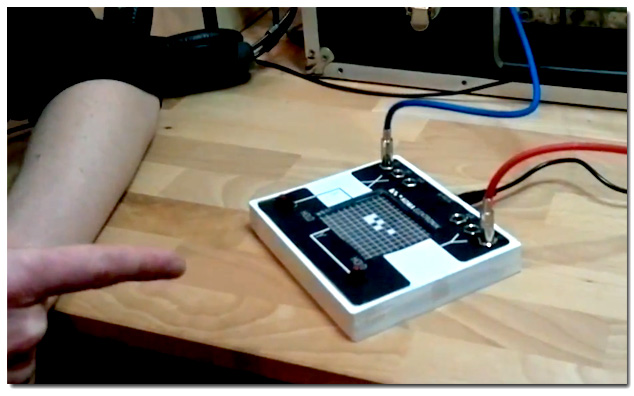 This is the first prototype of our new product: the KONTROL SURFACE! A 2-axis touch screen controller! As of now for each channel (X and Y) has:
– 1 x CV output
– 1 x inverted CV output
– Manual gate output

Each channel also has a hold function, so it will hold the current CV value as soon as the hold button is pressed. Not yet implemented but in development is a sort of ‘momentary/clocked hold function’, that means that a value is only taken and processed according to a provided external clock signal OR without a clock signal attached only when there are changes in the values, so you could lift of your finger from the pad, it will hold the value and as soon as you touch the controller on another point it will start processing again and so on and so forth…