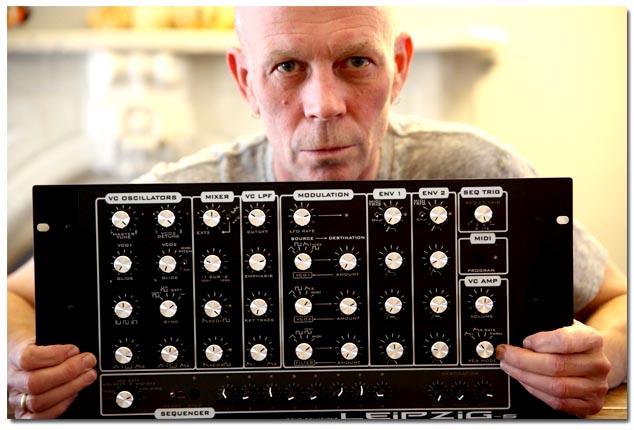 Depeche Mode, Yazoo, The Assembly, and Erasure all have two things in common: one, they were founded by Vince Clarke; two, they have all enjoyed catchy Clarke-penned, synth-driven Top Ten hits in the UK and beyond. In a noteworthy career spanning four decades and countless millions of records sold, Clarke has had more hit singles than most of us have had hot dinners, clocking up no fewer than 17 Top Ten entries in the UK with Erasure alone. And let’s not forget five consecutive chart-topping albums — not bad going in the increasingly disposable world of pop, be it synth- driven or otherwise.

Clearly, Clarke knows a thing or two about songwriting, as attested to by being honoured with 2009’s Ivor Novello Award for Outstanding Song Collection by BASCA (British Academy of Songwriters, Composers, and Authors). Of course, Clarke can comfortably find his way around a fair number of synthesisers, too, as attested to by the well-earned songwriting success-funded collection of analogue classics currently residing at his NYC-based studio, recently relocated from a custom-built cabin in rural Maine to inner-city Brooklyn. But this is no millionaire’s museum piece, but rather a unique personal workspace, where each and every awe-inspiring instrument within regularly earns its keep on a variety of musical projects, with Clarke becoming something of a sought-after remixer of late, as well as collaborating with former Depeche Mode bandmate Martin Gore for the first time in 30-odd years as techno-inspired two-piece VCMG.

Yes, Vince Clarke certainly knows a great-sounding synth when he hears one, which is exactly why an Analogue Solutions Leipzig-S analogue monosynth/step sequencer has made the transatlantic crossing to join him in Brooklyn: “It’s a real ‘hands-on’ synth — lots of knobs, thick sound, and truly analogue.”

Leipzig-S creator Tom Carpenter echoes Vince Clarke’s considered sentiment, for it is, indeed, truly an analogue affair; both its voice and modulation circuitry are analogue through and through, fashioned from discrete components. No naughty digital LFOs or EGs are allowed here, thank you very much! All its well-spaced, high-quality potentiometers are hardwired directly to the circuitry beyond to ensure all that old-school, carefully-crafted analogue goodness gushes forth for all to hear. And no memories mean that each and every parameter is ‘live’ to the touch, without any unwanted CPU-induced quantisation and stabilisation side-effects — What You See Is What You Hear, in other words!

But that’s not all: a direct descendant of its namesake Leipzig (rack-mount) and Leipzig-k (keyboard) analogue monosynth predecessors, the rack-mountable/desktop Leipzig-S literally goes several steps further by incorporating an inbuilt eight-step analogue sequencer that can be used to produce superficially simple melodic lines, as well as acting as a modulation source to affect the (fat Moog-style) filter cutoff, or to create additional effects — depending on other control settings, with VCO1, VCO2, and the VCF all available as sequencer destinations. Seemingly simple, yet favourably flexible, the step sequencer can be creatively clocked by multiple sources — at audio frequencies (using VCO2 as a clock source), or using the output of the sequencer itself as an audio source to be ‘played’ via MIDI while the eight step controls then alter the ‘waveform’/tonal content, for example, such are the adventurous advantages of amalgamating an analogue step sequencer with a true analogue monosynth! Vince Clarke is, naturally, no stranger to the joys of step sequencing: “I really like it that the sequencer is hardwired to the oscillators and filter, which makes for instant electro-ness.”

One thing’s for sure: synths are likely to remain Clarke’s calling card for the foreseeable future, an analogue-accepting, sweet-sounding time ahead that’s sure to include Analogue Solutions — analogue by name, analogue by nature. Clarke just can’t get enough… of his Leipzig-S: “I’ve used it on a couple of EDM tracks I’m working on, creating some big, fat bass sounds; there’s still lots more to explore.”

Leipzig-S is available to order online directly from Analogue Solutions for £749.00 GBP, excluding VAT and delivery, or through one of their dealers. (Alternatively, a keyboard-equipped version — the Leipzig-SK — is available for £1,099.00 GBP.)