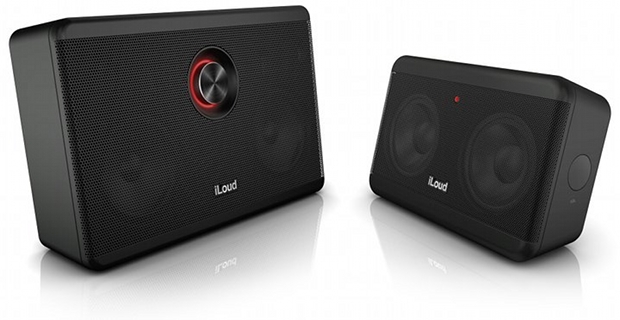 IK leveraged its 16 years of pro-audio engineering expertise, and its experience as the leading developer of mobile music-creation apps and accessories, to design battery-operated speakers that combine superior power, pristine frequency response and amazing low end in an ultra-portable form factor that make them the perfect alternative to studio speakers for music creation and composition on the go.

The iLoud line consists of two models, iLoud and iLoud MINI, both of which provide musicians with sonic accuracy that’s on par with professional studio monitors, making it possible, for the first time, to compose, record, and mix from a mobile speaker system.

Both iLoud models provide highly accurate reproduction of a wide range of musical styles from rock, hip-hop and electronic dance music, to more nuanced and sonically demanding genres like classical and acoustic. The speakers are equipped with onboard DSP, for maintaining accuracy and efficiency at all volume levels, and high-quality, custom-designed neodymium loudspeakers. iLoud is equipped with a bi-amped 4-driver array, and iLoud MINI with a pair of full-range speakers. The enclosures feature bass-reflex and passive radiators construction, which helps create their superior bass response, with tilted profile for perfect listening position.

iLoud also offers the possibility to connect a guitar, bass or dynamic microphone directly to the speaker and process the sound with a multitude of real-time effects apps. Featuring the same circuitry as IK’s iRig – the most popular mobile interface of all time – the input allows users to plug in an instrument and access AmpliTube or other audio apps on their mobile device for practising, performing and recording. The input also accommodates dynamic microphones, making it possible to run an app such as IK’s VocaLive for realtime vocal effects and recording.

In addition to their impressive response, volume, and features, the iLoud speakers are surprisingly small, exceptionally portable, and can be used everywhere. iLoud MINI, the smaller of the two, is only about the width and height of an iPad mini while iLoud has the size of an iPad. Only 6cm / 2.3″ thick, either model can easily fit in a laptop bag or backpack. Both iLoud and iLoud MINI are also equipped with a high-performance Li-Ion rechargeable battery with smart power-management features that reduce its power consumption, making possible to go long periods without recharging, an important factor for mobile users.

Both iLoud models support Bluetooth operation, which adds even more to their mobility. Users can stream music to them from any compatible mobile device such as an iPhone, iPod touch or iPad for casual listening. For sound sources like MP3 players that don’t have Bluetooth capabilities, the iLoud speakers each have a stereo 1/8″ mini-jack input for connecting line-level devices such as home stereos, DJ gear, mixers, MP3 players, and more.

iLoud will be priced €239.99 and iLoud MINI €159.99 (ex. VAT) and they will be available in the second quarter of 2013 from the IK network of music and electronic retailers around the world. For more information, go to www.ikmultimedia.com/iloud