Mark Woodcock has always focused on producing the best sound he could obtain for his clients. As an independent sound engineer, production manager and head of Man In Motion Productions, Woodcock has worked with artists ranging from Merle Haggard and Godsmack to Rob Zombie and Gavin Rossdale. On his two most recent front of house gigs, mixing for Richie Sambora’s solo tour and for long-time client Bush, he opted to go with MIDAS digital consoles. 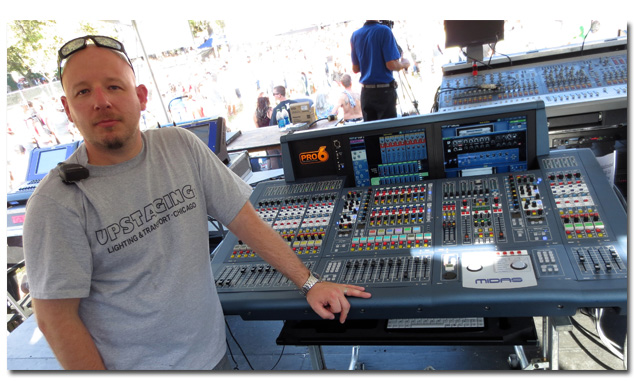 “I’ve always loved the MIDAS sound, but had been carrying another console for several years, basically because of the easy access to all the plug-ins,” Woodcock notes. “But then I found myself on a PRO6 when Bush was heading to Asia to do some shows with Evanescence. Sound Image sent one over to rehearsals, and I worked with a tech to build my show and get familiar with it. It took me a day to wrap my head around it, but it was pretty easy after I learned the basics. The bottom line is, the sound was amazing right off the bat, and I’ve been on MIDAS ever since.”

“It’s on my rider, and that’s not going to change.”

One of Woodcock’s favorite aspects of the MIDAS digital platform is its ability to achieve the sound he wants without relying on plugins or other devices. “I don’t use anything externally, purely just the console,” he says. “Everything on board sounds great – comps, gates, everything. The KLARK TEKNIK EQs are especially great. They’re sensitive and accurate, so you don’t have to make radical adjustments like you do on some other digital desks. It’s sounds like you’re using an analog console – even better, a MIDAS analog console.”

After the Bush tour, Woodcock got the gig mixing front of house for Richie Sambora, who was going out in support of his new solo album, Aftermath of the Lowdown. Using MIDAS on the Sambora tour proved to be a great fit for Woodcock’s mixing style. “Richie is obviously an amazing player, but people don’t realize what a great singer he is. Plus he put together this amazing band. As soon as I heard them, I knew it would take a MIDAS desk to do them justice. I chose the PRO9 for our European run.”

Sambora’s show runs well over two hours, incorporating the new solo material along with a few Bon Jovi tunes and some other covers. “He just goes out and has fun,” says Woodcock. “You never know what’s going to happen. I mean, there’s a set list, but on any given night, he’ll call an audible and everyone just has to be ready. With the POP Groups and VCAs on the MIDAS, I’m not in layers anymore, which makes everything quicker and easier. I hit one button and everything I need is right on top. I’m kind of old school, so it’s perfect for my style of mixing a rock show. It’s a live band and you’re in the moment with them, so that’s how I do it – on the fly. Frankly, I get better results and more enjoyment mixing that way.”

This is not to say that Woodcock doesn’t appreciate the technology he’s found in the MIDAS mixing system, such as the Area B feature, which dedicates four faders on the far right of the surface to be “always on top” and able to act independently from the rest of the console. “I love using Area B. That’s a really handy feature,” he says. “I use it for playback before the show, then put things like delay and effects returns there so I can punch in and out.”

Woodcock used the Sambora tour to delve even deeper into the MIDAS digital world, opting to add the KLARK TEKNIK DN9331 Rapide graphic EQ controller to his arsenal. “It’s basically a remote for all your on-board EQs,” he explains. “It lets me bounce between all my KT EQs – on subgroups, frontfills, mains, wherever, all without ever using the surface. What a great tool!”

In fact, the more Mark Woodcock uses the MIDAS PRO Series, the more he likes it. “The way MIDAS got the sound of their XL4 preamps and KLARK TEKNIK EQs into the digital world so seamlessly is the key. I know it’s a 96k system and the height of technology, but the bottom line is, they used it the right way,” he says. “For me, MIDAS is the closest you can get to an analog console sound in the digital world. Let’s put it this way: it’s on my rider, and that’s not going to change.”