When Pioneer introduced the CDJ-2000nexus last month there was a lot of fuss in the DJ World. Namely the Sync feature stirred up a lot of heated discussions. But there was more, the fact that the new Industry Standard had the ability to connect wirelessly with devices containing RekordBox gave room for discussion. But when the Pioneer XDJ-AERO was announced a couple of months before, everybody thought that this unit had such great possibilities. Everone was excited about the way of wireless connectivity with IOS and ANDROID devices and the sync feature. So, isn’t that what the Nexus brings us too? At the introduction of the XDJ-Aero we got excited about its features and wanted to test the AERO ourselves. So read all about our findings in the review: XDJ-AERO, the perfect home solution: yes or no?

The Aero surface can be divided into three segments. The decks on the right and left with mixer in the middle. The decks are both identical with the exception that on the left you’ll have the power, WPS (wireless) switch and the USB connector slot. Each deck has the typical Pioneer division of CDJ jogwheels with the display above it with three information lines. Below the display we find the FX section (per deck). At the top-left of the controller is a see-through plastic display that shows how many devices have been connected through WiFi, with a maximum of four devices. 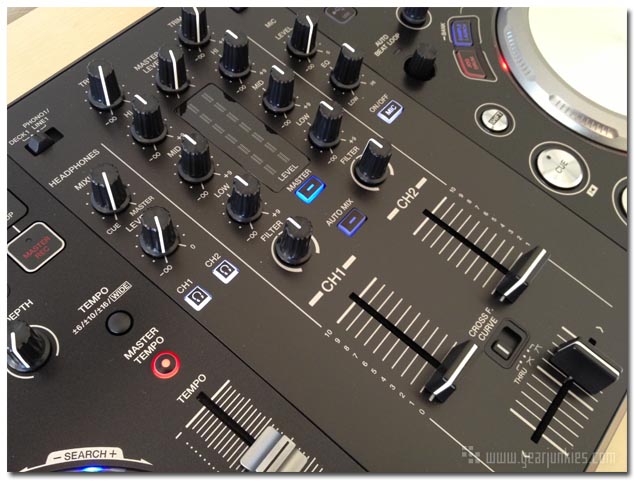 The first impression I got after unboxing the controller was: “Ok this thing is clearly made out of plastic, but the feeling is very solid!” The Aero is constructed into a one piece controller with a weighted base and rubber feet to ensure it will keep its place. Even with over-enthusiastic Djs, the controller will keep its ground. Another fact I noticed is the quality of the buttons, faders and sliders. They feel very solid as well. As does the CDJ-like jogwheels. All in all this is very well built controller and so does he feel when using it.

On the fron of the XDJ-Aero there’s a small and large jack connector for one or two headphones. As said before, on the top we have the USB connector slot for your flashdrives and such. At the rear of the controller there are lots of connectors available. From your DC power, USB connector for PC/Laptop if you want to use it as a controller, microphone connector, two master out, two line ins (which are switchable to phono), and more. Also a ‘ground’ for use with turntables of course.

You can use the XDJ-Aero in several ways which gives it usability for anyone. There are the following options:

Here you can use non-analysed and analysed (rekordbox) files. Just plug in your USB drive or your computer (USB at the rear) and start playing. You can also record your liveset on the USB drive. The same one you play the tracks of!

The XDJ-Aero can be connected to any rekordbox device by WiFi and play tracks wirelessly. Like I mentioned before from not more then four devices. This implies that you can play not just your own tracks but also tracks from another person. From his smartphone for example that is connected to the controller via WiFi. This is possible via a secure WiFi network built-in the Aero. You allow who has acces onto the network. When a device is connected you can scroll through the tracks and playlist on that device. After selection you can also load that track into the controllers decks and use it. You can even send a track from you iOS or Android device to a deck on your Aero! 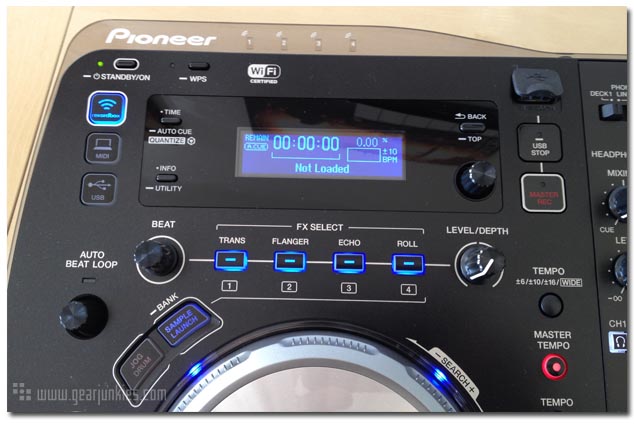 The WiFi connection is very secure and stable because I could even be called on my iPhone while streaming tracks to the controller without any problem. The XDJ has furthermore a built-in buffer which loads the track into the memory of the controller. The advantage of this is that if there is a connection problem the track will continue to play from the memory. In the case the track hasn’t been loaded completely yet, the controller will go into a emergency loop untill you stop it yourself after transitioning to the next track.

The Pioneer XDJ-Aero is a full-on midi controller as well. You can use it with any (modern) DJ software. Standard it works with Traktor Pro and VirtualDJ. Because the controller is completely midi mappable any software would be possible in the end.

I think it’s amazing Pioneer still succeeds to improve the platters of their controllers. On the Aero you’ll get new ‘conductive sensitive’ jogs with ‘slightest touch’ technology. Which means they are super sensitive. With this new technology they introduced two new usable features to the XDJ:

By tapping on the platter you can create a rhythm and let this be heard. For this you use a self-chosen cue point.

Here you can choose out of four pre-programmed samples or by adding your own samples and play them by tapping the platter. Think of scratch samples for example.

Each deck on the Aero has four effects. First one is Trans for transforming your sound. Second is Flanger, which influences the sound by a high or low pitch. Echo, is a delay effect. And fourth is a Roll effect which cuts up your sound into pieces. Every effect can be controlled by a rotary knob to set the amount of effect on the sound.

The controller has built-in loop function which sets an automatic four bar loop. Through a rotary know you can set/alter the length of this loop. With use of rekordbox these loops are perfectly timed/synced, always!

Another usability feature on the controller is the automix function. When your tracks are analysed with rekordbox the controller can mix tracks in and out … automatically. Nice feature but I truly have my doubts why any self-respecting DJ would use this, even if you are a beginner. 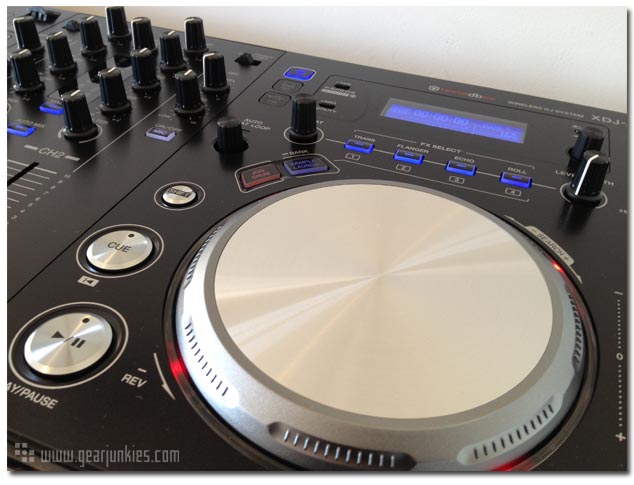 Well, what more can I say about this then, perfect! However, this doesn’t mean that when you hit the ‘sync’ button the Aero will do all the work. You still have to line up your tracks chose the right moment of transition. Furthermore not every track is lined up perfectly after hitting sync. You will have to give it a nudge now and then, but that’s where the jogwheels are for, right!?

After playing with it for a while, I am still amazed. As long as you work with the Pioneer software (rekordbox) it all works fantastic. Everything is super tight with the sync function, even if you have to give the jogwheel a nudge now and then, but after that, perfect sync. When you use loops the timing will remain perfect as well. The effects are top notch too. And then there is this main feature of the controller, its ‘wirelessness’. Very good! I noticed as I was doing a live-set I could switch between sources without a glitch or problem. It all worked very fast and easy!

I think the Pioneer XDJ-Aero is a perfect solution for anyone who wants the features of the high-end professional products from Pioneer in a more affordable package. Pioneer markets the controller as a all-in-one DJ system and with this they don’t claim anything too much, because it really fits a lot of features into one solution. After playing with the Aero for a couple of weeks I can truly say this controller takes first place with ease when it comes to all-in-one controllers. Pioneer prides its name by taking a big lead (again) on the competition…!