According to Harman these new mixing consoles offer Euro for Euro (And Dollar for Dollar), the World’s Most Advanced Audio Console. At the NAMM they launched the Soundcraft® Si Expression digital console range, tagged as the most advanced digital console in this low price category. 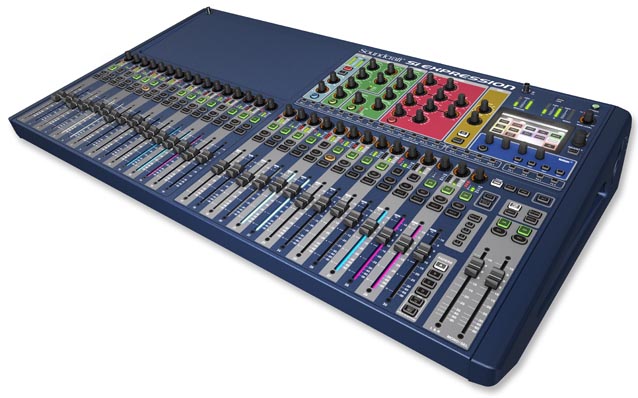 Available in three frame sizes, Si Expression 1, 2 and 3 offering 16, 24 and 32 fader and mic inputs respectively, all three are capable of up to a staggering 66 inputs to mix by connecting any Soundcraft stagebox including the two new Mini Stagebox 16 and 32 (16 x 8 and 32 x 16) models also launched today at the show (separate release) or by connecting additional inputs over MADI or AES/EBU. All external inputs are additional to the connections on the desk itself.

In true Soundcraft style, the mixer is loaded with industry standard processing from HARMAN siblings BSS®, dbx®, Lexicon® and Studer® and many top-end professional features like a colour touchscreen, iPad ViSi Remote control and Soundcraft FaderGlow™, adopted from Soundcraft’s Vi Series large format flagship consoles.. FaderGlow is a patented technology that automatically illuminates specific faders in varying colours according to their assignment enabling you to focus on the mix, not where signals might be.

An incredibly powerful DSP engine provides four-band parametric EQ, delays, gates and compressors on every input, parametric and 30-band graphic EQ, compressors and delays on all outputs, as well as four Lexicon stereo effects devices, all capable of being utilised at the same time, unlike most consoles in this class. Soundcraft ViSi Remote allows remote control of the console from an iPad.

Freely assignable fader layers allow you to place inputs and outputs anywhere on any layer, optimising your mix control for the most important channels.

Andy Trott, Soundcraft and Studer’s Vice President and General Manager says this is one of the most exciting new developments in his 10 years running Harman’s mixer business. “A Soundcraft at this low price point is a departure from tradition for us,” he noted. “The Si Expression is based on new technology bridging the current Si Compact and Si Performer ranges and meets a totally new price point for Soundcraft making this product highly attractive to those looking for a professional console, at a budget price. Other companies will continue to produce ‘cheap’ mixers, we make professional, high-quality, easy to use mixers in the same price range—which makes the customer’s decision easier!”

The console is packed with professional features and a wide range of networking and option cards, the most recent of which is the BSS BLU Link card, also launched today enabling simple and automatic connection to the dbx PMC16 Personal Monitoring System.

Si Expression is designed for all mixing applications ranging from gigging bands, performance venues, installations and tours, corporate AV and theatres to houses of worship and education facilities.