Last year globally renowned sound designer Rob Papen published The 4 Element Synth book with four accompanying DVDs totalling over 10 hours of tutorial content to critical acclaim. According to fellow sound designer Ian Boddy, “The whole package comes in a beautifully packaged book. Superbly bound and elegantly printed, it has the feel of a quality coffee table book — it even has such nice details as a silk bookmark and pull-out 4 Element Synth chart, complete with four DVDs stuffed to the brim to watch in conjunction with the contents of the book.” 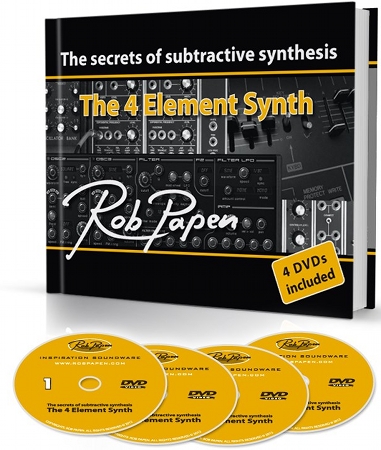 Appropriately subtitled The secrets of subtractive synthesis, this 200-plus-page enlightening tome was many years in the making, effectively dating back to 2001 when Rob Papen started teaching exclusive masterclasses in synth sound design in his well-stocked studio using the likes of his beloved Roland Jupiter 8 programmable polysynth and seminal Korg MS-20 semi-modular monosynth alongside other vintage analogue classics and more modern counterparts. Here he developed an approach to working with subtractive synthesis that he termed The 4-Element Synth© — hence the book/DVD set’s title. As implied by name, the book basically breaks subtractive synthesis down into four digestible and distinct chapters or elements: Element-1 / Oscillators, Element-2 / Filter, Element-3 / Amplifier, and Element-4 / Modulators — each of which receive their own equally easy-to-follow DVD treatment, thanks in no small part to the talented author and presenter’s easy- going onscreen persona.

No teaching technique needs to be set in stone, however; there is almost always room for improvement — or even additional content, as is the case with The 4 Element Synth. The beauty of online content is that it can, of course, be updated far faster than print or physical media, which is exactly what Rob Papen has done by uploading two additional Element-4 / Modulators chapter-related bonus videos here: www.robpapen.com/book-a-dvds-extras.html

Anyone who has already purchased The 4 Element Synth book/DVD set is invited to thereby (re)read the LFO and Element-2 section (p152) and then watch an all-new accompanying video about LFO and resonance modulation. Meanwhile, the Three points to keep in mind using an envelope section (p107) also benefits from additional demonstrative video content; as Rob Papen himself says, “There’s another important point about envelope modulation of the filter. As we’ve said already in the Element-2 chapter, many producers and synth players often use only the cutoff knob; they forget that there is also an envelope amount and the envelope settings that can change the sound — and not just a little bit! Keep these three points in mind when you’re working with the filter section of your synthesizer.”

Speaking of synthesizers, apart from those aforesaid analogue classics and a rather impressive looking (and sounding) ‘Moog-alike’ System-22 modular system from Synthesizers.com — all of which make musical onscreen appearances throughout The 4 Element Synth DVDs, Rob Papen also makes much use of his own company’s Predator — a ‘phat’ sounding killer soft synth that combines inspiring presets and first-class features to create the perfect ‘go-to’ synth for contemporary music production. Predator and Predator RE users can also download the preset banks used on the DVDs.

Needless to say, anyone wishing to literally uncover the secrets of subtractive synthesis should surely look no further than The 4 Element Synth book/DVD set — now more enlightening than ever, thanks to these latest enhancements!

The 4 Element Synth book/DVD set can be ordered online directly from Rob Papen within the EU for €74.00 EURO (including 6% VAT) or outside the EU for €69.00 EURO — plus shipping (where appropriate) — from here: www.robpapen.com/buy-dvd-sound-design.html.

Rob Papen is also delighted to announce availability of The 4 Element Synth from US dealer Sweetwater, as well as via various European dealers.