Novation have made a FREE soundbank available for the MiniNova and UltraNova synthesizers.This free soundbank is based on the sounds of the legendary Supernova synth. Novation’s ground-breaking Supernova set the standard for virtual analogue synthesisers when it was released in 1998. With its comprehensive modelling of traditional analogue subtractive synthesis, uniquely powerful multi-effects engine and expressive filter, the award-winning rack-mount Supernova and its successor, Supernova II, were the most powerful synths of their time –class leaders, still revered today. 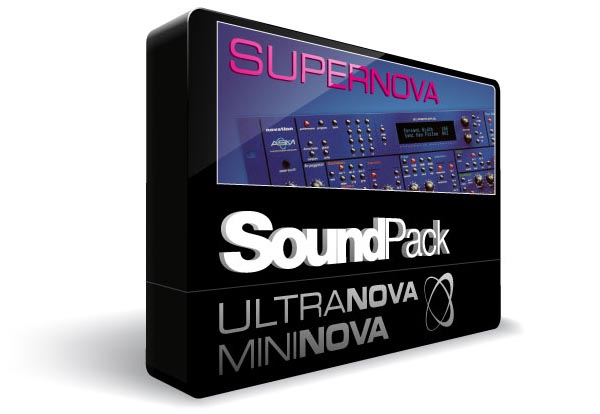 Sound designer Phil McDonald created the iconic sounds of the Supernova that changed the sound of dance music at the turn of the Millennium, powering classics by Orbital, ATB, Jean Michel Jarre and A Guy Called Gerald, plus many more. Now, with the massive revival of interest in the sounds and music of the period, Novation is proud to announce the release of two new soundpacks for the MiniNova and UltraNova, containing sounds from the original Supernova sound banks, by the original sound designer. These soundpacks give you the original classic sounds of the turn of the century – and they’re absolutely free.

The first of the two soundpacks, with 64 sounds, is available now, as part of Novation’s 21st Anniversary celebrations, with the second pack available later in the year.

Get your free Supernova sound packs from www.novationmusic.com/soundpacks.

Recapture the classic sounds of the Millennium, give your MiniNova or UltraNova a Supernova supercharge and make these sounds your own, with these classic original Phil McDonald sounds, absolutely free of charge.