RME’s MADIface, the world’s first and only portable MADI solution, is based on an ExpressCard design. Unfortunately that interface has vanished from nearly all notebooks and laptops these days. A good reason for the RME engineers to find a similar solution on an interface platform that is found absolutely everywhere – USB 2. And yes, the new MADIface USB makes the impossible possible: full 64 channels simultaneous recording and playback (128 channels) via ‘normal’ USB 2, as only RME can do it. And because the new unit doesn’t need any external interface card anymore it will be available at a much lower price. 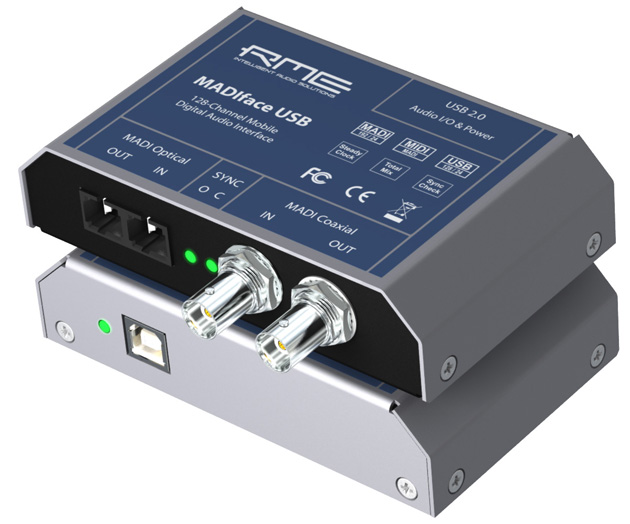 The MADIface USB is a compact device that provides MADI I/O via USB2 while supporting the format’s full 64 channels. Its sturdy and bus-powered design makes it as easy to use as reliable in operation. SteadyClock as well as RME’s well known MADI compatibility ensure hassle-free operation with other devices.

The optical and coaxial input offer RME’s Seamless Redundancy operation, switching between the two inputs in real-time if one of the signals fails. The optical and coaxial MADI outputs operate simultaneously. The RME driver architecture for Mac and PC features Total-Mix, a low latency 48bit internal mixer and routing matrix, and MIDI over MADI technology that may be used to remote-control other MADI devices. DIGICheck, an included complete audio analyzing suite, supports the user under Mac OS X and Windows.

In stand-alone mode the unit automatically operates as repeater, effectively doubling the maximum cable length of 100 m coaxial and 2,000 m optical. As the inputs switch automatically, and both outputs carry the same signal, it also works as active (jitter reducing) optical to coaxial or vice versa converter.