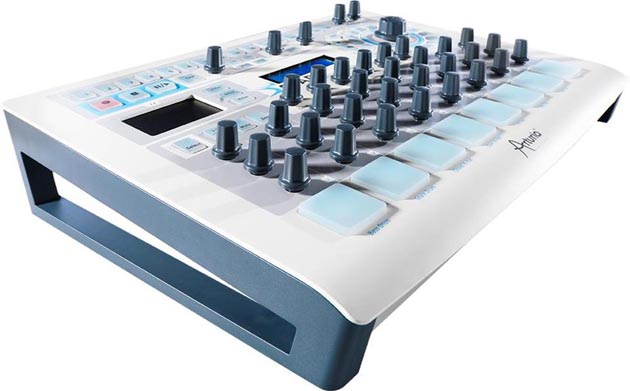 Hollywood hotshot sound designers Larry Hopkins (The Following, Vampire Diaries, Revenge), Alan Howarth (Poltergeist, Raiders Of The Lost Ark, Back To The Future II), and Mark Mangini (Die Hard, Star Trek, The Fifth Element) have pooled their considerable creative resources to create Hollywood Essentials. As such, it features an attractive library of 30 ear- catching kits with 480 instruments and 960 patterns ranging

from field recordings made in the likes of auto body shops and dentists to ethereal sci-fi soundscapes and action sequence percussion ensembles fit for any adventurous blockbusting Hollywood motion picture!

Whether Hollywood Essentials users choose to score a film with those stimulating sounds or creatively apply them to other musical genres as they see fit, all integrate perfectly with everything those revolutionary SPARK software-sharing SPARK Creative Drum Machine and SparkLE hybrid hardware/software beat production centres have to offer. Performance- enhancing tools like the XY Pad, Looper, and Slicer; 14 high-quality effects; and a speedy step Sequencer come together to make track creation and automation a breeze. Each and every beat and sound can be twisted and tweaked, thanks to the intuitive and creative workflow that lies at the very heart of the SPARK Creative Drum Machine concept.

So why not expand your SPARK Creative Drum Machine or SparkLE’s sonic horizons with Hollywood Essentials and set your sights on conquering the big screen? Maybe the Hans Zimmers of the world should watch their backs… there may soon be some new faces to contend with in Tinsel Town!

Hollywood Essentials requires SPARK Creative Drum Machine Version 1.5 (or higher), and can be purchased and downloaded directly from the Arturia online store for €29.00 EUR/$29.00 USD.