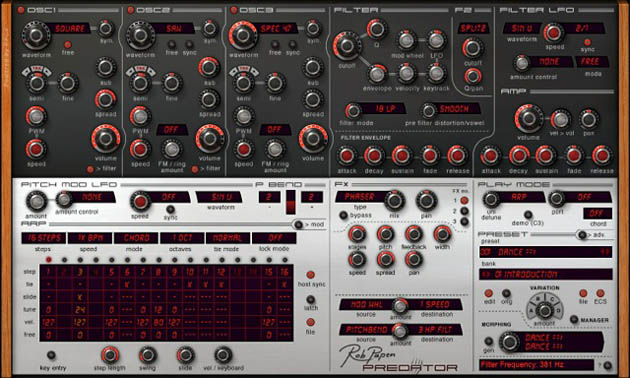 This ‘phat’-sounding killer soft synth that combines inspiring presets and first-class features to create the perfect ‘go-to’ synth for contemporary music production — has been successfully doing just that since its introduction in 2009, as attested to by the long list of professional producers and musicians who have happily put aside their beloved synthesizer hardware in favour of this ambient, drum ’n’ bass, club, hardstyle, hip-hop, and house music mainstay’s thousands of tailor-made presets — many made by Rob Papen himself, long since established as a sought-after sound designer in his own right, having created presets for several well-known companies before going on to found his own namesake company.

There is always room for improvement, however, and with Predator 1.6.4 the best just got a whole lot better — and bigger! First and foremost, studio-based producers and musicians maximising ‘screen estate’ to speed up DAW workflow will appreciate the appropriately- named new Big Screen graphic mode, which instantly increases the original Predator GUI by 150%. After all, making things easier on the eye clearly helps when it comes to making things easier on the ears in this day and age of visually enhancing the computer-based composition and recording process with big screens!

Of course, sound is where the art is, and, given its pedigree, Predator 1.6.4 does not disappoint with over 450 new presets to its numerically lengthened name conveniently arranged in Dance, Classic Synth, Ambient, DubStep and Hardstyle BD Basses groupings. Indeed, Rob Papen himself is in the fortuitous position of being personally in contact with many of the world’s top producers and musicians who regularly use his company’s products and so can quickly act upon providing requested sounds and features to comfortably remain on the cutting edge of contemporary music production with Predator.

Other features new to Predator 1.6.4 include additional Clipper Distortion (with symmetry control) and Tape Chorus effects; Vowel, Formant 2-band, and Formant 4-band readouts (which when selected result in the Distortion dial displaying VOWEL or BANDWIDTH); and External MIDI Capture Mode (that allows a parameter to start changing as soon as the external MIDI controller reaches the displayed preset value).

Looking to add some bite to your contemporary music productions? Then look no further than Predator — now better than ever, thanks to this latest update!

Predator can be purchased as a boxed version from authorised Rob Papen dealers worldwide for €149.00 EUR (including VAT/tax)/$179.00 USD or downloaded directly from Rob Papen here.