High-quality synthesizer developer Waldorf is proud to announce availability of Rocket Control, a free iOS assistant app for iPad that boosts the capabilities of its Rocket hardware synthesizer. 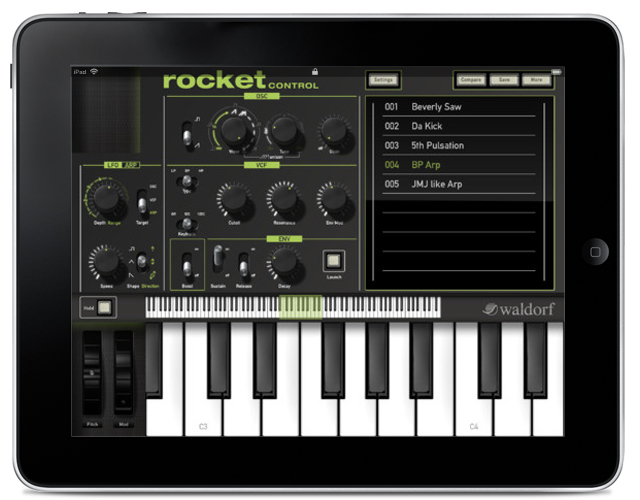 Earlier this year, Waldorf went hell for leather to break the price/performance sound barrier when launching its revolutionary Rocket, a superficially simplistic USB-powered desktop synthesizer with digital waveforms and analogue multimode filter housed in a sturdy, compact and bijou (185 x 185 mm) casing. But beneath an eye-catching faceplate designed by synthesizer style guru Axel Hartmann lies a wealth of ear-opening sounds fit to reach for the stars! To the untrained eye it may look like the Rocket only offers a single oscillator, but truly trained Rocket scientists can soon see (and hear) that its OSC section includes some highly-flexible features: for example, selecting the sawtooth waveform switch then turning the adjacent Wave knob clockwise from the centre position adds up to eight sawtooth waves — wunderbar for producing PolySaw cluster-type sounds; selecting the sawtooth waveform and turning both the Wave and Tune knobs to their respective rightmost position activates a special unison mode whereby all eight sawtooth oscillators sound with frequencies according to the held notes, so playing a chord with up to eight notes results in that chord being played by all eight oscillators, whereas playing a single note produces just that — a single note, albeit with all eight oscillators slightly detuned to enrich the sound. Either way, it’s a big sound from a little box with much more on offer besides! Blast off by selecting Boost to add warm, distorted characteristics, perhaps?

But hitting an attractive price point while maintaing Waldorf’s all-important high-quality synthesizer sound meant making some tough design decisions. Rocket has no patch memories, for instance — no great loss to those creative types who like to sculpt sounds each and every time they play, but useful nonetheless in an age of instant recall.

Which is exactly where Rocket Control comes into play. This free iOS assistant app for iPad acts as a synth editor for the Rocket and allows users to edit and/or save their patches (when connected via a Camera Connection Kit, WiFi MIDI, or a CoreMIDI-compatible device). Edits can be viewed onscreen or edited directly on the iPad itself. Users can even play the Rocket using the Rocket Control keyboard — plus Pitch and Mod wheels!

What’s not to like? Rocket Control is invaluable and free! So do yourself a favour and give your Rocket a sonic boost by heading on over to Apple’s App Store and downloading Rocket Control… then reach for the stars!

The Rocket synthesizer is available to purchase from Waldorf dealers worldwide with an RRP of €244.00 EUR/$349.99 USD (including tax).