Nomad Factory is proud to announce the launch of COSMOS, an amazing tool for sonic enhancement and low-end fattening that will elevate the sound of your tracks to soaring new heights. 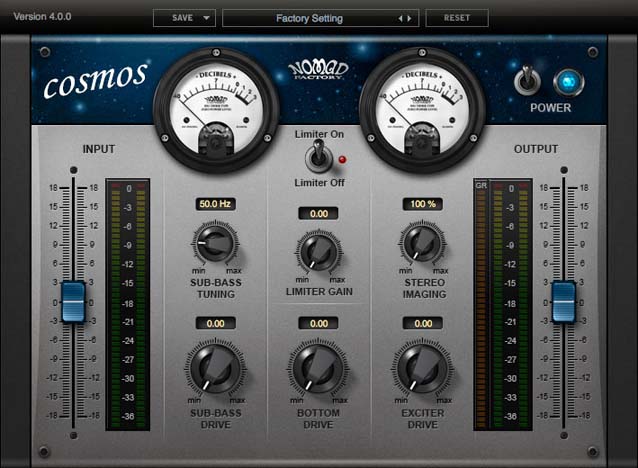 This new plugin is designed to improve clarity and punch without increasing gain, which results in a more balanced sound. The plug-in uses harmonic enhancement instead of traditional EQ boosting to bring out desirable frequencies in your audio material. COSMOS works great to improve the sound quality of any audio source, including compressed mp3 files, podcasts and voice-over work.

COSMOS also features a tuneable synth sub-generator that can give your audio a huge boost in the low frequency department. For years, audiophiles have used this secret technique to fatten bass parts, kick drums and give mixes a thunderous bottom end. COSMOS’s built-in limiter and imaging add an extra dimension of control and stereo enhancement.

Nomad Factory has partnered with their friends at DontCrack to do a special exclusive bundle with the brand new COSMOS associated with the ever-popular MAGNETIC II and ECHOES. This bundle gives you the greatest analog toolset ever “MAGNETICS BUNDLE II“. These three plug-ins together will give end-users the means to have the “ultimate analog” sound for their mixes.

MAGNETIC II, is Nomad’s popular Reel-to-Reel Audio Tape Warming effect that gives your tracks the elusive vintage tape sound which your ears crave. This effect can inject sterile audio with the warmth and character of classic tube circuitry and analog tape saturation.

ECHOES is their great-sounding Analog Echo Box plug-in designed to give you the warmth and richness of classic vintage delay effects. ECHOES faithfully models the greatest delay effects of all time, PLX-1 based on* Echoplex® 1, PLX-3 based on* Echoplex 3, OILCAN based on* Tel-Ray® Oilcan Delay, EHX-DM based on* Electro Harmonix® Deluxe Memory Man, and ADM-2 based on* Boss® DM-2 Analog Delay.