The Clavi D9 is based on the well known clavinet D6 by hohner. It is probably one of the most “funky” instruments ever invented, despite the fact that it was originally intended for classical music as its sound is close to the hapsichord. It turns out that it was very well suited to replace or double a rhythmic guitar and was used in many Funk and Disco hits. 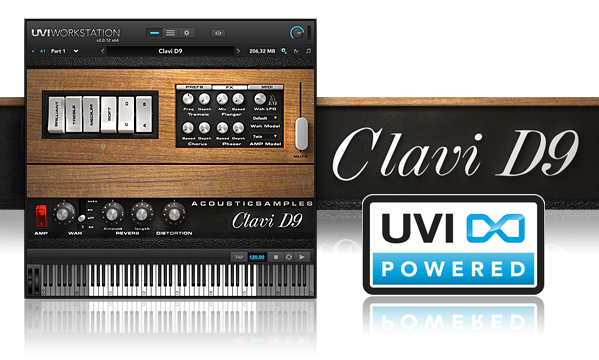 The clavinet has 5 octaves (60 keys) and works in a simple way, when you press a note, the string is pressed against a bridge just like a hammer-on on a guitar, the non muted part of the string vibrates and the pickups amplify the sound.

The D6 has very few controls, 4 eq switches and 2 pickup switches to choose which pickup has to be used plus a global volume. They recorded both pickups  and modeled them precisely the eqs, as a result you can use the whites switches exactly like on the real instrument. They sampled every possible aspect of the instrument, normal notes, staccatos, releases, mutes, every pickup, sympathetic resonances and more to give you the most authentic Clavinet sound possible.