There is something special about the metal outfit In Flames and how they constantly challenge the unwritten rules of music. Unruly and difficult to pinpoint, each album different from the others. Metal with hint of death, layers of electronic wizardry and vocals oscillating between being harshly desperate and clear as crystal. Their signature sound is not something fixed, it is ever evolving and hard to describe as something else than In Flames in full effect. 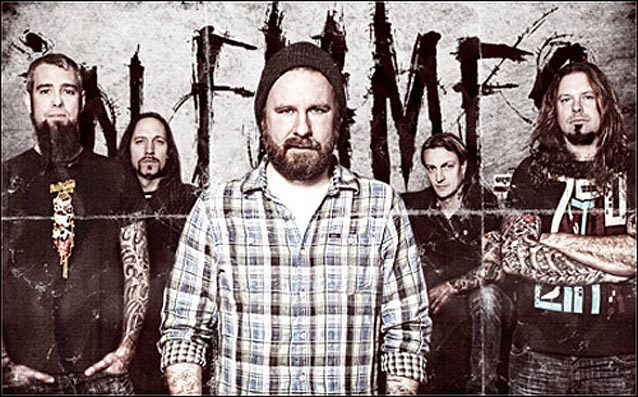 Anders Fridén answers with a voice slightly muffled from a cold he has caught. He is at his office. Apart from handling vocals and writing songs for In Flames he also runs the record label Razzia Notes, an initiative with the simple mission of serving the rock scene with the best music available.

— Working with the label is a nice complement to being a part of In Flames. I’ve been engaged in this side of the music industry for a couple of years now, as I ran the Selective Notes label prior to Razzia Notes. I really enjoy helping other artists find themselves and their sound and I try to be as involved in them as I can, visiting them during their studio work, giving them advice an so on. Sort of like being their mentor.

Being fully involved with music, whether it is by dealing with other artists or focusing on his own, wasn’t the original plan for Anders. Somewhere around 1997 the popularity of In Flames exploded and the wheels started spinning faster and faster. The only way forward for In Flames meant full dedication to the band.

— Around this time I had applied for some university courses and thought I’d study, get a job and so on. But then everything happened so fast. We got signed to a major label, got our own management and things just really took off. So instead of studying I decided to put all my efforts in In Flames.

This choice of profession has paid off. For each album release, In Flames have managed to climb higher and higher on the charts. Their latest album, Songs of a Playground Fading (2011), impressively managed to debut at number 27 on the US Billboard 200 chart. The album and its predecessor, A Sense of Purpose (2009) were recorded in In Flames’ own studio. Interestingly, the studio, bearing the somewhat laconic name IF Studio, is located in the same facilities as the legendary Studio Fredman, which in the 1990s was integral in shaping the so called Gothenburg sound. At the Gates, Hammerfall, Opeth and Dark Tranquillity are but a few metal bands whose music has been immortalized in the vast Studio Fredman recording space.

— Working in our own studio had both its advantages and disadvantages. You know the gear and how everything works, but at the same time it is easy to get comfy and spend too much time just fiddling around. The recording sessions for our latest album, Sounds Of A Playground Fading, lasted for three weeks which is unusually long for an In Flames album. For our coming album however, we’ll work in an external studio. It’s always good to shake things up a bit and see what comes out of it.

You and the guitarist Björn Gelotte write most of the In Flames material together. How does the conception and evolution of an In Flames song look like?

— After I and Björn have created the basic structures for the songs the band enters the studio. That’s were things really happen. We add MIDI drums to get a feel of what works and not. Once that’s done our drummer Daniel replaces the programmed drums with real drums. More often than not it’s a radical difference between the demo version and the finished version of our songs, but they should always retain that special In Flames feel.

Widely regarded as one of the more successful metal bands around, In Flames are not afraid of stepping out of the mold. Electronic instruments are often used to enhance their take on melodic death metal, something especially evident on the 2004 album Soundtrack to Your Escape.

— We have been working with electronic instruments for quite some time, actually since the end of the 1990s I think. Initially we experimented with fairly basic drum loops and effects but gradually got more and more advanced working with synths and samplers. In Flames will always be a metal band, but I really like the notion of bending established genre rules. I love exploring.

What sparked your interest in electronic sounds?

— When I was around ten I discovered Depeche Mode and got totally floored. I’ve always been a part of both camps so to speak, involved in the metal scene but still listening to more electronically based music. It was quite a big issue back then when I was younger, as things were more static in a way. If you liked metal, you should like metal and nothing else. As the years have passed I’ve become more relaxed with the whole thing. Being influenced by music you like, no matter what genre they belong to, is something I see as very rewarding.

Appreciating electronic music and getting interested in the equipment used to realize the music is not the same thing. However, for many, Anders included, they are intrinsically linked. Blips and squeaks from the Commodore 64 constituted his first experience with electronic sounds. Then followed toy keyboards, an Atari used for sequencing duties and various other bits and bobs. But it wasn’t until he started working in a studio he really got bitten by the electronic instrument bug.

— Yeah, it was like being introduced to a completely new world. Electronic instruments are so devoid of boundaries. You can sculpt sounds that are interesting in themselves and really free yourself from musical constraints. Starting from a clean slate, not really knowing where the machine will take you and then coming up with something that sounds great is amazing. That intuitive approach really captures the essence of music for me.

— I really enjoy the Analog Four and the Octatrack. They are so extremely capable and I’m fond of the tactile aspect of them. Soft synths have their uses, but I really want to feel what I’m doing. You can’t beat gripping real, physical knobs to make a filter sweep. I’ll be using both machines a lot in my solo project and they will for sure be featured on the coming In Flames album as well. I also own a Sidstation, I actually bought one of the last ones you had for sale. I’m really interested in the Machinedrum and the Monomachine as well and I think I’ll have to pick them up soon.

The solo project of yours, how will it differ from In Flames?

— It will be heavily oriented towards electronic music. I’m a big fan of Trent Reznor and the way he works with sounds. I’ve been listening and appreciating Nine Inch Nails for a long time now. Reznor really has a sense of what works and not when it comes to pure sounds.

His soundtrack for the film The Social Network was pretty amazing.

— It was! Creating a soundtrack is actually somewhat of a dream of mine. I’d love to approach that way of composing.

Working on a solo record, running a label, playing gigs all over the world all while preparing for the recording sessions for the upcoming In Flames album, slated for release in 2014. There is a lot going on for Anders. But there is room for more. This summer the In Flames camp will bring out something completely different and, perhaps, unexpected. Eleven issues of the comic The Jester’s Curse are in the works and the first issue is just about to be published.

— We were approached by the artist, a guy called Blake Armstrong, who showed us this more or less finished product he had made together with his co-writer Scott Bramble. I thought it looked absolutely stellar. The whole concept revolves around our band symbol, or mascot, called the Jester and his quest of finding his true self. His journey is based on the lyrics of all our albums. The first two issues will cover Lunar Strain and the rest of them will each focus on a different album. The magazines will be available worldwide and the first issue has an expected release late summer 2013. I really look forward to it!