What happened to the X32? It’s there… just a little bit smaller. The X32 COMPACT delivers the best of the flagship X32 console in a slightly smaller package for installs at smaller venues, houses of worship, theaters or discerning audio smiths who may not need as many local inputs or motorized faders. 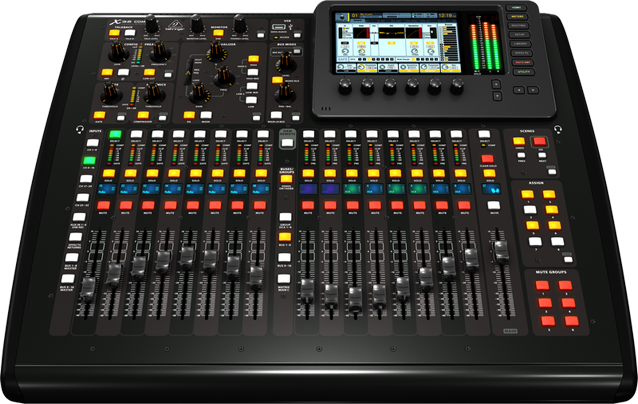 When Behringer began development on the X32 COMPACT, they called on our sister companies, MIDAS and KLARK TEKNIK, recognized the world over for their digital consoles and EQ/FX processing, for implementation support. The programmable, high-grade mic preamps found in the X32 COMPACT are based on a genuine MIDAS design, all the way down to their A/D converters. The resulting design ensures superior common mode rejection ratio (CMRR) and extremely low harmonic distortion (THD). The X32 COMPACT is an amazingly clean amalgam of high technology merged with superb user-friendly features.

They also received brilliant support from MIDAS and KLARK TEKNIK in designing X32 COMPACT’s GUI (graphical user interface), a major advancement in digital mixing made easy, productive, and well… fun! They also drew on their extensive experience in FPGA (Field Programmable Gate Array) coding for rock-solid, ultra-low latency digital channel patching—giving the X32 COMPACT the capacity to handle up to 168 sources on 168 destinations, including the two AES50 ports. You can expect to see more collaboration between BEHRINGER and MIDAS in the very near future.

Ultimate connectivity remains the battle cry of the X32 COMPACT with its 40 inputs, 25 buses, 16 programmable MIDAS-designed mic preamps, FireWire and USB 2.0 recording capability. Not sure which X32 is right for you? We totally get it. That’s why the entire X32 family is designed to be beautifully scalable through the powerful AES50 ports built right in. Connect the powerhouse S16 digital snakes to these inputs to add an additional 16 mic preamps to your setup.

Need another X32 for side of stage or the broadcast control booth? X32 COMPACT packs all the features with the same great 7″ TFT screen and customizable LCD scribble strip so you can take on the world of sound with all the firepower you’ll ever need – without hauling a world of outboard gear and analog snake cables.

TRACKTION 4 puts the fun back into the creative process, so they’re including it free of charge with select BEHRINGER products. This powerful, yet easy-to-use music production software is unlike anything you’ve seen before, putting everything you’ll need on your desktop, on a single-screen – without the sea of drop down and hidden menus common to most other DAWs. And TRACKTION doesn’t limit the number of tracks you can record, or the number of effects you can use. In fact, the only limitation is your Mac or PC computer’s processing power. Recording and editing couldn’t be easier; simply drag, drop, cut, copy or paste. Once your magnum opus is finished, share it with other “Tracktioneers” so they can listen, collaborate and edit. 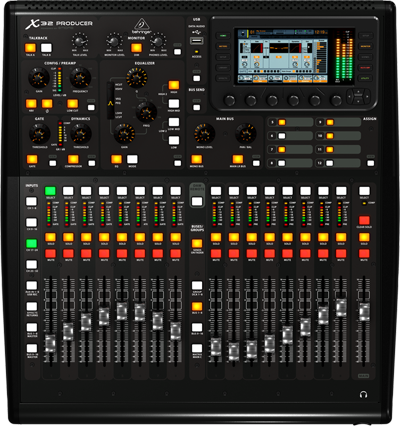 Processing power, ample I/O and flexible routing are central themes in the X32 PRODUCER. Where larger consoles make sense in fixed installations or studios, with the X32 PRODUCER, studio-caliber performance now goes wherever life takes you. Eight stereo effects engines provide the signal processing power equivalent to racks of outboard gear without having to haul anything besides the X32 PRODUCER.