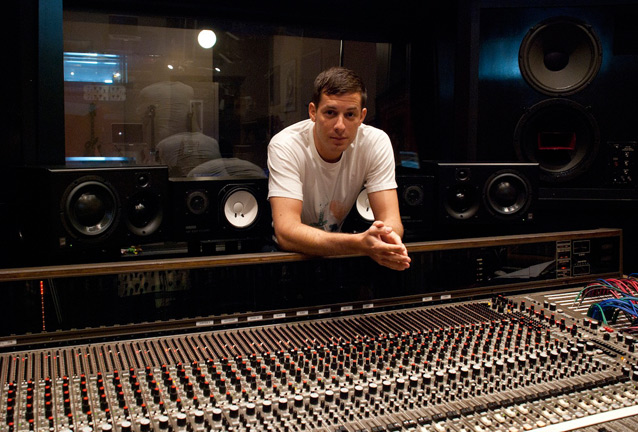 “I was looking for a place around here,” he says, having first established himself as a diverse DJ on the New York club scene in 1993, before moving into record production in 2001 with American singer Nikka Costa’s first US album release, Everybody Got Their Something. A string of high-profile pop production and performance credits quickly followed for the likes of Lily Allen, Robbie Williams, Nas, Adele, Bruno Mars, and, most notably, Amy Winehouse, with whom Ronson bagged no fewer than three Grammys in 2008 — Producer Of The Year, Record Of The Year, and Best Pop Vocal Album. Ronson soon stormed the charts in his own right with his second solo album, Version, hitting the number 2 spot in the UK and earning him a BRIT Award for Best Male Solo Artist in 2008. Ronson repeated the feat in 2010, reaching number 2 with a third studio album, Record Collection, credited to Mark Ronson & The Business Intl.

“I haven’t had my own studio since I left New York about four years ago,” continues Ronson. “I looked at some other prebuilt studios being sold, but then it came up that all these rooms were being built at Tileyard.”

With over 50 permanent recording studios to its notable name, Tileyard Studios, situated in London’s Kings Cross Central, bills itself as being the newest and most creative hub in Europe. Little wonder, then, that the super-successful Ronson was happy to put down his recording roots there: “Building my own place from scratch meant that I could incorporate some of my favourite things from all the studios that I’ve loved working at during the last four years, like the analogue aspect of Daptone in Brooklyn, where we recorded the Amy stuff, as well as the MIDI and computer aspect.”

Inspired by a visit to a new Nashville studio built for The Black Keys’ Dan Auerbach, Ronson recruited the studio designer responsible, Steve Durr, to collaborate with London-based consultant Chris Walls of Munro Acoustics to build something similar at Tileyard: “It just had a great vibe — kind of like one of those old RCA studios in Nashville, so my live room is, likewise, really well designed, with a no-frills vibe — like walking into any old studio from the ’60s.”

While Ronson may well have sought inspiration from the past for his live room, selecting suitable monitoring for his control room was a different proposition entirely with ATC’s SCM25A PRO three-way compact active loudspeakers quickly catching his ear: “I was walking around other studios with Chris Walls from Munro so he could get a sense of what I liked. We went to British Grove, and I just couldn’t believe how amazing they sounded — so much punch, bite, and growl, then this really pristine top end. It was kind of a revelation, and I just thought, ‘There’s no way I’m going to get any other speakers other than those when I get into my space.’ I was sold on first listen.”

With Ronson duly sold on what he had heard, London-based Funky Junk, Europe’s largest stockists of new and used professional audio equipment, made the sale. Says Ronson, “They were very cool and easy to work with. They let me borrow a pair to test them out when I was at Avatar in New York, tracking some stuff for Paul McCartney’s new album.”

Now that the super-sounding SCM25A PROs are happily nestling on the meter bridge of Ronson’s beloved vintage MCI 500 Series console at his super-sounding studio space at Tileyard, the results clearly speak volumes, as is borne out by their super-satisfied owner’s super-supportive closing comments: “When I was starting out, I used whatever monitors I could afford, then I worked my way up to things like Genelecs and KRKs — all really nice, but they’ve got nothing on the ATCs, as far as I’m concerned. For the most part, I spend most of my time on the ATCs now. They give a great image of everything that’s going on, whether I’m tracking a live band or working on something with a massive 808 kick drum.”

The SCM25A PRO three-way compact active loudspeakers carry a UK RRP of £7,156 GBP per pair, and are available worldwide from any authorised ATC stockist.