Iconic master funk bassist, singer and songwriter Bootsy Collins is larger than life and king of living in the moment. Youthful and innocent aspirations, supported by an unrelenting and infectious energy, spawned an awe inspiring career that continues with terrific momentum more than four decades in. 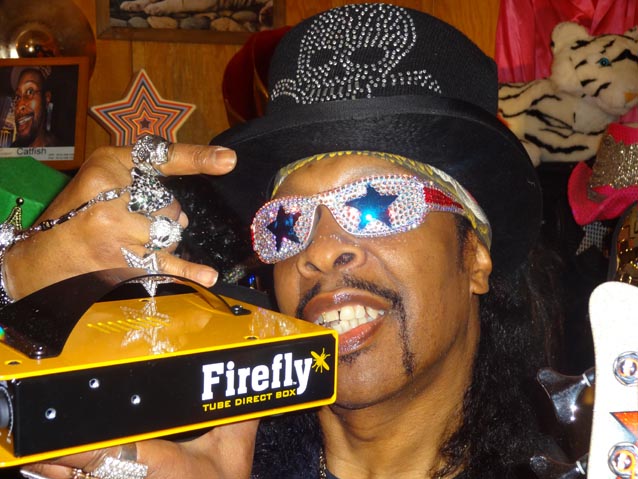 According to Collins, “It all comes from watching the skies and listening to the universe. Most older vets cut themselves off wanting to believe that time will stand still for what they know and have done. I understand that in order to stay in the business you have to remain in the business. Meaning, I cannot close my eyes or myself off to what is happening whether I like it or not. So what I do is bring my best shot to what is happening no matter what my opinion of it is. I put up or shut up, I can’t shut up so I choose to put up whatever I have to offer to the party. Keepin’ the funk drive alive is the key that runs the ‘FUNKSHIP’.“

Collins summarizes what has been on the forefront for him most recently: “I just got finished working on LL.Cool J’s album. I also just finished my vocal animation reel for Disney. I am starting my ‘Music for our Kids’ TV show where I will produce all the music for the show and the album’s theme music for the show.”  Collins also recently accepted the position as Guest Musical Director for UMIGO, an organization dedicated to promoting school readiness and achievement for children aged kindergarten to grade 2 with an emphasis on children from low income circumstances.  He will participate in the making of videos that teach critical problem solving and basic math skills. It’s clear that working with youth has a great deal of Collins’ attention these days particularly, of course, when it comes to introducing them to musicianship. “The most joy is to help inspire kids back to playing and using live gear. I get so funked up when I see a kid that is really into playing live instruments. Almost as if it was a dying art form. When I see their light – that is ‘Spreading Hope like Dope’ as I would call it.”

Behind the star-shaped shades and outrageous costuming is a big talent whose pursuit of fun and positivity is inspiring in its authenticity: “I love superheroes, I love the kids emulating them. If I had the position to allow them to become a super hero, if only for a day, it would be very exciting. The other part of that is to see kids from all back grounds put in a space where there is no separation, no separate religions or political overtones so that they can have a chance to become as one people like we were designed to be. I would jump at being a part of this ‘One Nation under a Groovement’.”

Collins often works from one of his two studios and is happy to report he has been flying in what he refers to as the ‘Firefly Zone‘ these days. He has recently added Radial’s first tube DI to his gear arsenal. The cheerful yellow box has been getting a lot of attention since its debut and Collins includes himself as a fan. “I am now using the Firefly in both my studios with my very new Warwick-Star-Spacebass.The Firefly is very pleasantly warm, while it can get very chunky and funked up, it also can be punchy and clean, so whatever the scheme, the Firefly can funk up a bad dream, or a wet one, (laughs). As you know, I use a lot of effects and the Firefly allows them to breath instead of deceasing or animating the true sound of whatever I throw in it or at it. It does not break up or change the tone unless I want that, in some cases I do and you have right there whatever you need to adjust to any situation. What I want for Christmas is four more of them; they are the first four thangs on my To Funk List.”