Expanding its range of overdrive, fuzz and distortion pedals that began with the iconic LPB-1 Linear Power Booster and Big Muff Pi, Electro-Harmonix now introduces its first pedal designed around a JRC4558 integrated circuit: the East River Drive. Those in the know about New York City and the NYC-based EHX will recognize that the pedal was named after the river which separates the boroughs of Manhattan and Queens and the eponymously named “Drive” that enables New Yorkers to motor along it. 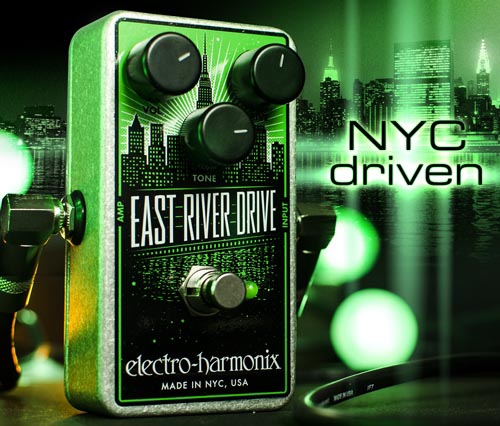 As bold as New York City, the new East River Driver delivers classic symmetrical overdrive with a natural, transparent quality in a compact road-worthy package. The traditional control layout includes Volume, Tone and Drive knobs to make dialing-in the desired sound quick and easy. Volume sets the overall output level. Drive controls the amount of input gain. As the control is moved clockwise, the overdrive ranges from mild edge to classic distortion. Tone enables the player to tailor his sound regardless of his guitar and amp of choice.

The versatile East River Drive can be used effectively in front of a clean amp or to push an already overdriven amp. True bypass switching is featured to preserve signal path integrity. It comes equipped with a 9-volt battery and can be powered by an optional 9.6-Volt/DC200mA AC adapter. The East River Drive carries a U.S List Price of $77.38 and is available now.