Two years after the release of the BD101 and FT201, Berlin based effects manufacturer KOMA Elektronik has officially added a new unit to their pedal line: The RH301 – Rhythm Workstation / Utility Tool! 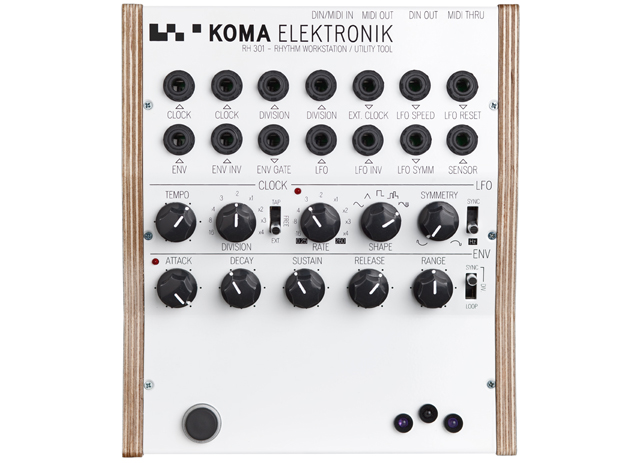 This Rhythm Workstation is KOMA Elektronik’s solution for a problem that can give many musicians and producers a headache: analog and digital equipment that needs to run side by side, in sync, but at the same time still needs to be controllable, which is not always an easy task! There are many standards out there: MIDI, DIN Sync, analog clocks and control voltages in the form of LFOs and envelopes. That they don’t always work together the way you want them to is a time consuming and annoying reality. This is why we decided to build a universal tool that helps electronic musicians get the most out of their equipment by properly syncing a large amount of devices in many different ways, without losing a ‘hands-on’ feeling and creativity!

The beating heart of the RH301 is the master clock, of which the tempo can be set by turning the Tempo knob, by tapping a tempo on the tap button, by syncing it to MIDI, DIN Sync or an external analog clock signal. The generated clock signal can be passed on via two clock outputs, two division outputs or via the MIDI Output and DIN Sync Output. An incoming MIDI signal can also be passed along via the MIDI Thru and MIDI Out sockets.

And that’s not all: besides having a master clock section, the RH301 is also fitted with a LFO which can be synced to the master clock, a division of the master clock, or run freely from 0,25 Hz to 260 Hz in five different waveforms: sine, triangle, square, S&H and noisine. This means the pedal can also be used as an lo-fi oscillator, when you turn the LFO up into the audible range. The LFO has two separate outputs on the patch bay: LFO out and LFO inverted out. Some of the features of the LFO can also be modulated via control voltage, the pedal boasts CV inputs for LFO SPEED, LFO RESET and LFO SYMMETRY.

Sync able Envelope Generator The third main feature of the RH301 is an Envelope Generator which can easily be synced to the master clock, a division of the master clock, an external gate/trigger or run freely in loop mode. Besides the normal controls for ATTACK, DECAY, SUSTAIN and RELEASE the pedal comes with a RANGE knob to change the time range of the envelope created. The envelope generator comes with a normal envelope output, but also an inverted envelope output and can be triggered by an external gate / trigger via the external gate Input.

To improve playability and to stimulate your creative process, the RH301 also has a built-in infra red motion controller, which can be used to control the CV inputs of the RH301, other KOMA products or any device that accepts CV inputs in general, since it has it’s own dedicated SENSOR Output on the patch bay of the pedal.  No matter what your setup is, digital or analog, if you use a modular synthesizer, Computer with DAW (like Ableton, Logic etc.), drum computer, synthesizer or KOMA’s own BD101 and FT201 effect pedals, the RH301 is an effective tool to make sure they all walk in line, so you have your hands free to create beautiful music.