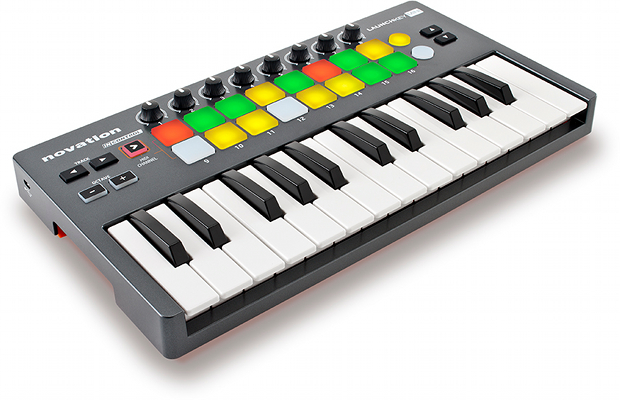 Launchkey Mini At A Glance

The latest in the growing family of Novation “Launch” products, Launchkey Mini provides an instantly accessible mini keyboard and launch pad controller for a wide range of software apps on iPad or computer. It’s a keyboard/DAW controller with 26 assignable controls, offering fuss free hands-on control of major music software via Novation’s easy-to-use “InControl” technology. The 16 launch pads are velocity-sensitive and can be used to play drum sounds and samples expressively, as well as launch clips and scenes in Ableton Live. Ableton Live Lite is included in the package, along with an extensive Loopmasters sample pack.

In addition, Launchkey Mini comes with a suite of apps for iPad, Mac and PC which transform the controller into a production and performance instrument. Use the free Launchpad app with Launchkey Mini on your iPad to trigger the included professional sample library and control effects, letting you produce and perform music straight away. Load in new pro sound packs and import your own samples for an even more unique performance, before sharing your creation with a growing fanbase. Launchkey Mini connects directly to your iPad with the Apple Camera Connection Kit (not included) and it’s powered by the iPad.

The Launchkey app for iPad is a synth filled with Novation technology, allowing you to control notes with the Launchkey Mini’s keyboard while warping the sound with the knobs or via intuitive multi touch control on the iPad’s screen. The Launchkey and Launchpad apps sync together perfectly for simultaneous use. Launchkey Mini also integrates with the included V-Station and Bass Station soft synths for Mac and Windows.