After Le Masque Delay and Oxium, it’s time for Xils-lab vintage BucketBrigadeDelay Analog Chor’X chorus unit to get some new clothes and enhancements this year. This major update, adds a 4th Chorus algorithm to the Dimension-D, Synthex, and CS-80 ones, as well as some refined versions of these 3 existing modules. 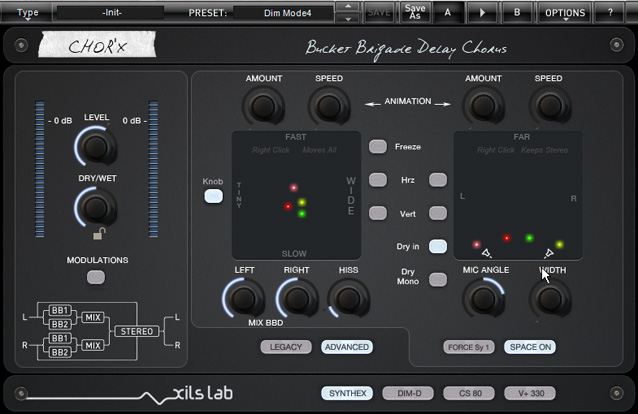 At a surface level, the totally revamped GUI greatly enhances the workflow within with an ability to speedily switch between LEGACY and ADVANCED modes. The default LEGACY mode makes it easy to access the distinctive and desirable sounds of those four classic choruses with the greatest of ease — without worrying about delving deep to change complex parameters. Alternatively, ADVANCED mode does exactly what it says on the tin: by behaving just like the original Chor’X release, it provides access to all the internal parameters for each chorus type — only this time with four choruses to choose from, of course. Chor’X 1.5 projects and presets are also fully backwards-compatible courtesy of ADVANCED mode, so it’s nice to know that time spent seriously sound-sculpting with the original Chor’X will have been time well spent. Dig digging deeper. Or not. The choice is out there!

Speaking of which, the True Stereo Dynamic Engine allows adventurous users to create complex, spectacular stereo scenes using the improved realtime ANIMATION controls: MIC ANGLE sets the position of the virtual microphones and WIDTH increases or decreases the width of the stereo space, while moving the associated lights around another 2D modulation panel perfects positioning the sound. Sounds amazing? It is! It’s now possible, though, to bypass these two modulation panels with the push of a (SPACE ON) button and perfectly preserve the legacy sound of the chorus algorithms — all or nothing, what a beautiful combination!

Clearly, there was a time when a super-sounding onboard chorus represented the pinnacle of cutting-edge synth design, something XILS-lab is well versed in having developed several soft synths that pay homage to some synth classics. Now, thanks to Chor’X 1.5, some of those super-sounding chorus classics can be added to any DAW track — synth-based or otherwise! Why wait?