Even though JBL are not that well know in Europe for their product line of reference monitors, unlike in the US, their new 3 series may help with this. The new 3 series are JBL entry level reference monitors that come in 2 models. The LSR305 with a 5″woofer and the LSR308 with a 8″woofer. We will test the LSR308 and compare them with the competitors in the same price range. To that extent the price range isn’t entry level for your average producer. But of course there is a difference in sound quality. So these monitors are more like the 2nd pair you’d buy if you learned your first monitors don’t cut it anymore.

The main function of reference monitors is them being a tool you can use to make decisions on mixing based on the sounds you hear. Often people confuse this with great sounding monitors and underestimate the adaptation of the human brain to new sounds. And even people tend to make a choice based on the looks of the monitors. In this case the 308’s have the advantage of looking rather sophisticated because they have a classic neutral look. The power led should have been put behind the JBL logo though. But that’s just my personal opinion.

The 308’s are bi-amped by two 56 Watt (RMS) amps and have each a -2,0,+2 trim option. You also can switch the XLR or 1/4″ inputs to 10dB or +4 and have a 1 to 10 volume control. The back also has the bass reflection port so you cannot put them close to a wall. The front has the woofer and a tweeter that is built in a cone to enhance the soundstage. The specs claim that they can produce 112dB SPL. JBL has been building monitors for decades so in this field they most certainly have the expertise to do so. The specs claim 37Hz to 24kHz frequency range. But that hardly describes how they sound. 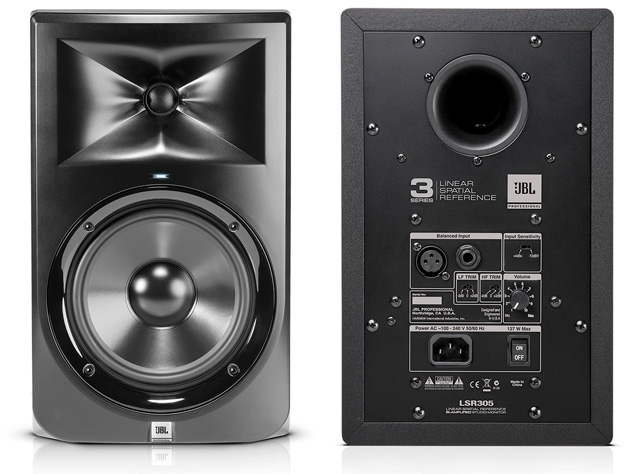 Testing speakers often takes quite some time. It helps you use the music you know best which is often your own music. And also using a wide variety of styles will point out particular strong and weak spots. Having tried several styles from classical to EDM to rock and metal.

Transients are very well translated by these monitors. The tweeters are giving a rather good stereo response and are quite detailed. This can help if your room isn’t able to be acoustically altered. During testing I’d switched them to -2dB though because the higher frequencies can be dominant and almost sterile sounding. When it comes to the lower sounds to me the claim of 37Hz seem to be a tad on the positive side. When you are into D&B you may consider adding a separate subwoofer to get some more energy of  the low-end.

The typical dance kick gets translated well but the bas sound may tend to sound ‘boxed’ in certain cases. In the mid section there seems to be a slight gap and the stereo image seems to be less detailed than the tweeters. Still quite good enough for most vocals and solo instruments but when you have to decide on those 0.5dB adjustments per tracks may be hard to hear the differences. To me it’s clear the woofer is the weakest link of these monitors. But nonetheless these monitors appear to be very neutral and on top of that can get very loud before they start to distort. Which makes them more interesting for people who look for DJ monitors. But they aren’t limited to that target group.

They are usable for all types of music I’d reckon. They give the competition a good run for the money. If you look for a new set in this price-range you should try them out.

As you might understand this is the 5 inch version of the LSR308. Our Dutch DJ website (dj2dj.nl) took the 305’s for a spin as they would be a nice alternative for the home producer and bedroom DJ who was looking for some well priced monitors. The monitors left a good vibe behind as they were even slightly better then the Rokit RP5 G2 our reviewer compared them with. Definitely within its price range also a set worth checking out as well.