The Future Retro Mondovox provides new ways to play, control, and breathe new life into your MIDI sound modules. With the Mondovox, you can polyphonically play up to 16 monophonic synthesizers in ways you would expect to find in features-laden polysynths, expanding upon those ideas for many new and exciting possibilities.

…as long as it has MIDI

Although it’s designed to play multiple monosynths (such as our popular XS semi-modular synthesizer) polyphonically, the Mondovox can be used with any monophonic, polyphonic, multitimbral or single voice, analog, digital, virtual synthesizer or sampler…. it doesn’t matter, as long as it has MIDI.

The Mondovox takes polyphonic MIDI data and translates it to so that each voice is on its own MIDI channel.

There are nine different polyphonic modes of operation

UNISON: Stack up to 16 voices to play in unison for one big sound. Unlike traditional polysynths that only allow you to play a single note while in unison mode, the Mondovox allows you to play up to 16 notes simultaneously, creating huge unison chords. Obviously, this will depend on the available voices in the sound module you are controlling. While digital and virtual analog synths usually provide high voice counts to support these unison chords, controlling analog monosynths in this way will activate their auto-glide portamento circuitry.

UNISON DETUNE: Three Unison Detune modes — detune down, detune up/down, and detune up — allow you to play up to 16 notes in unison, as well as detune all voices to varying degrees simply by moving the pitch bender. Once you discover this feature, you will wonder how you ever made music without it. As you increase the pitch bender value, small amounts of detune will create “true chorus” effects, unlike traditional cyclic DSP chorusing effects. Increase the pitch bender more to discover that you can make any sound module take on that “super saw”-like quality, although obviously you’re not limited to just sawtooth waveforms. Increase the pitch bender even more and sounds take on buzzing swarm effects, and finally as you move into extreme settings, a dark side reveals itself, producing eerie dissonant sound effects perfect for any scary movie. Releasing the pitch bender retains the degree of detuning so you’re free to concentrate on playing and tweaking your sounds. Moving the pitch bender in the negative range will then clear the detune setting, bringing all voices back into perfect unison.

Just like in Unison mode, you can play up to 16 of these detuned unison voices polyphonically, so long as your sound module supports that many voices. By the way, that’s 256 voices, for those wondering. Let’s just say you haven’t experienced “phat” until you’ve tried the Mondovox!

Another interesting fact about these detune modes is that you can detune the voices, then select a different polyphonic mode in the Mondovox and it will remember the detuning for each voice. This capability creates a wonderfully simplistic way to get boring “perfectly tuned” digital synths out of their static element and into new experimental territory.

UNISON POLY: In this mode, playing a single note will cause all active voices to play in unison. Playing a second note will reassign half the voices to the new note value, and playing additional notes will further allocate the available voices as evenly as possible between the number of notes currently being played. Unison Poly mode allows the overall weight of a musical part to remain fairly consistent when alternating between playing single notes and chords.

DON’T PANIC: If you are an intergalactic traveller you probably already know what this mode is for. However for those of you who aren’t, it’s simply a means for you to stay calm if the sound module you are controlling is not be able to comprehend the large amounts of MIDI data the Mondovox is capable of producing. In other words, it sends an “All Notes Off” MIDI message to clear voices should they become latched. Selecting the proper processor routing mode (mentioned later), will usually elliminate the need for such panic. 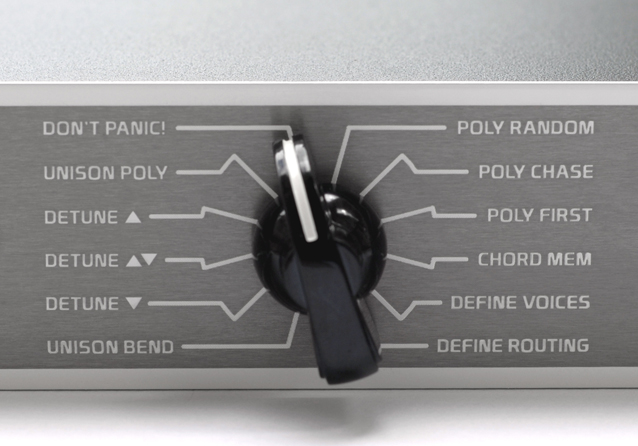 POLY RANDOM: Poly Random mode allows notes played to be randomly sent to 1 of up to 16 voices, adding more variation from one note to the next when similar sounds are played. You may also assign different sounds to each MIDI channel within a sound module, and this mode will then randomly play those different sounds at the current pitch.

POLY CHASE: This mode plays one available voice after another sequentially. Sometimes this is referred to as “round robin.” Poly Chase ensures that if you play a single note repeatedly, that it will sound slightly different with each new key press. In addition, the Mondovox lets you use this mode as a psuedo sequencer, allowing you to play different sounds sequentially on different MIDI channels. You can set the loop point from 1 to 16 steps by the number of voices you define. The Mondovox will reset to begin playing voice 1 each time you select this mode.

POLY FIRST: Poly First mode always plays voice 1 first, and as more notes are played simultaneously, voices 2, 3, 4, etc. will sound. Repeatedly playing and releasing a single note will allow voice 1 to play only. This feature allows the voices played to be more predictable with repeatable results.

CHORD MEM: While in Poly First mode, you can play and hold up to 16 notes, and switch to the Chord Memory selection to latch the chord into memory. You can then play that same chord by playing a single note on your MIDI controller. The root of the latched chord will be the first note you played while in Poly First mode. Not only can you play chords with single keys, you can play up to 16 transpositions of this chord by playing up to 16 keys. Of course this will be limited by the number of available voices in the sound module you are controlling.

DEFINE VOICES: When in Define Voices mode, you can enter the number of voices to be enabled by simply tapping a key on your MIDI controller once for each voice. The number of voices defined will remain in memory even when the unit is turned off.

DEFINE ROUTING: This mode determines how MIDI is handled by each of the four internal MIDI processors. Routing 1 allows each of the four processors to play all 16 MIDI channels — useful when controlling a multitimbral sound module and you only need to use a single MIDI output. However, you could connect up to 16 multitimbral sound modules to play giant stacks of up to 256 voices at once using all available MIDI Out ports. Routing 2 assigns each processor to handle four MIDI channels in sequential order, allowing faster MIDI timing than the Routing 1 option while still maintaining easy routing when using lower voice counts. Routing 3 assigns each processor to handle every fourth MIDI channel, provideing the fastest MIDI timing, as four notes can be sent over MIDI simultaneously. The routing selection is stored in memory even when power is turned off.

The Mondovox will detect the MIDI channel of the first note it receives after being powered on, and it will automatically set the incoming MIDI channel to that value. A universal DC power supply is provided with each unit, that can operate anywhere in the world. Each Mondovox is handmade in the USA using only the finest components, with a great deal of attention going into every unit. A rugged all-steel chassis makes this unit nearly indestructible, and the unique finishing technique used on the brushed stainless steel front panels is truly an industry first.

Although simple in its design with only a single control, the Future Retro Mondovox offers an amazing range of possibilities! A must-have piece for any MIDI user. Future Retro