Multi-GRAMMY Award-winning producer/mixer, Chris Lord-Alge, whose resume includes recordings for Muse, Pink, Foo Fighters, Avril Lavigne, Green Day, Daughtry, Paramore and Black Eyed Peas, to name a few, has stayed with the trusted Sony 48-track tape format for over two decades, interfacing it with his equally vintage workhorse SSL 4000 E/G+ analogue console as well as an incredible amount of mostly vintage outboard gear. It’s been Lord-Alge’s signature sound all that time, and it continues to stand up for hit after hit. 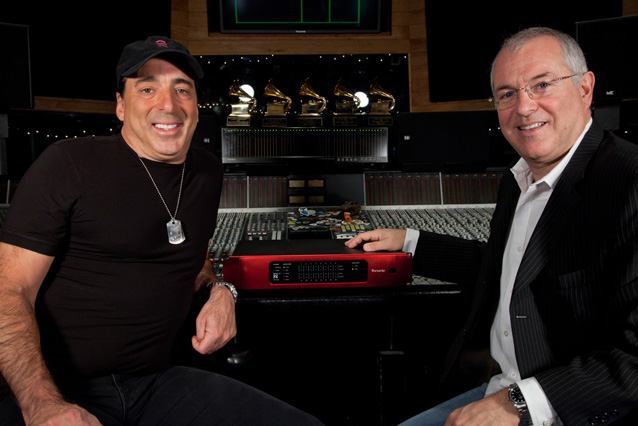 “Making the Leap” to Tapeless Workflow

However, while the DASH format may be bulletproof, it is not invulnerable to the passage of time, and now Lord-Alge is in the midst of what for him is a sea change to an all-digital nonlinear workflow.  This significant event is made possible by RedNet, Focusrite’s finest range of audio interfaces.

“Yeah, the DASH format, it’s been over for a while, period,” Lord-Alge acknowledges somewhat wistfully. “I mean, they stopped making the tape in ’07, so I can’t hold onto it for very much longer. I have to go into something that’s not running off the tape. So in order to make the switch [to a completely nonlinear workflow] I needed to hear something that met my standards and worked with my other studio equipment. So when [Focusrite President] Phil Wagner asked me to audition the RedNet interfaces for my Pro Tools|HD rig, I listened, I gave it a thorough test drive and I liked what I heard. It sounds very similar to what I already have, which I don’t really want to change. So this will be the cornerstone of my new workflow.“

Lord-Alge is making this leap of technology based on more than just RedNet’s remarkable sonics. “I put faith in Focusrite, as they have a track record of over 20 years of making high-quality, bulletproof audio products. Add to that my personal relationship with key members of their team, and the fact that I know they will be there with the right support if I need them, and it’s clearly the right choice moving forward.”

According to Phil Wagner, “Chris has a particular workflow which has proved to be very effective. Using two RedNet 5 32 channel HD Bridges for Pro Tools|HD and three RedNet 2 16 channel A/D – D/A interfaces he is connecting directly to the workstation as opposed to transferring to the Sony 3348.” he explains. “This requires a very high-quality converter, providing the hit making sound quality Chris is accustomed to. When we did the original RedNet demo at his Mix LA studio, Chris was pleased enough with the sound that he decided to use RedNet interfaces to make that transition from tape. He’s now using the full 48 channel RedNet I/O complement to feed his SSL console. We’re thrilled that Chris has chosen the RedNet system to make this workflow transition.”

“I’ve been using a Focusrite Red3 Classic Dual-Channel Compressor/Limiter on my two-channel mastering part of the process forever, and I’ve always been pleased with the audio quality,” stated Chris Lord-Alge. “So now to be able to have Focusrite from the multi-track playback side forward is quite a big step for me.”

Wagner adds, “This is quite an important move for both Chris and for Focusrite, we hope the audio community recognises the significance and choose RedNet as their workstation I/O system of choice. We are extremely pleased that Chris is on board. We look forward to hearing the results!”

To learn more about RedNet, head to www.focusrite.com/rednet