Steinberg announced the release of the new VST Sound Instrument Set, Sounds of Soul, which adds to the sound library of Retrologue with classic synthesizer sounds influenced by the soul, disco, funk and R’n’B genres between the 1970s and 2000s. 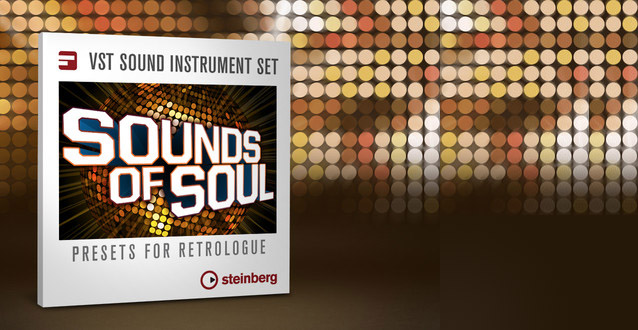 “After Vintage Classics for Retrologue, we bring to you Sounds of Soul, a smorgasbord of landmark synth sounds you’re very likely to have heard in more than one past production,” commented Matthias Quellmann, product marketing manager at Steinberg.

Sounds of Soul for Retrologue synthesizer

The Sounds of Soul VST Sound Instrument Set boasts over 400 presets, celebrating legendary synthesizer sounds of the soul, disco and funk era as heard in the 1970s, R’n’B induced pop from the 1980s and the hip-hop styles of the 1990s and 2000s.

Created by Dave Polich, sound designer and programmer for many high-profile artists and major manufacturers, Sounds of Soul provides a beautiful blend of synthesizer sounds highly revered by musicians of all stripes.

Sounds of Soul is an expansion pack for Retrologue. Retrologue is available as standalone VST instrument for VST 3, VST 2 and AU hosts. Retrologue is also included in Cubase and Cubase Artist versions 7.5, 7 and 6.5, the Nuendo 6 Expansion Kit and the Absolute VST Instrument Collection.

Sounds of Soul is available as download through the Steinberg Online Shop. The price is 29.99 euros including German VAT.