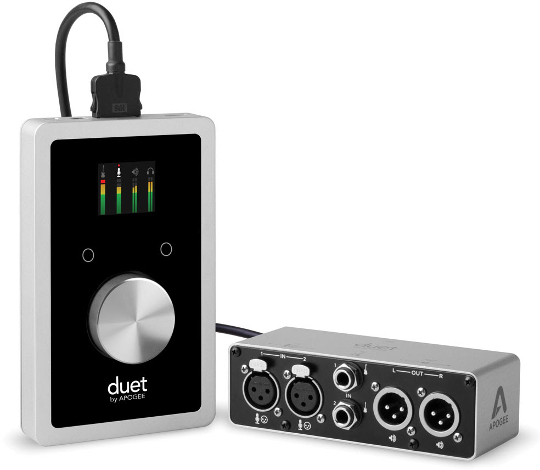 With the two products now packaged in a single bundle for an attractive price (the two have a combined value of $749), there has never been a better time to upgrade to the most popular portable audio interface for Mac. Apogee Duet for iPad & Mac is the first professional stereo audio interface, headphone amp and MIDI interface for iOS devices and Mac. Featuring two channels of Apogee’s industry-leading AD/DA conversion, dynamically optimized mic preamps and an acclaimed user interface, Duet is the best and simplest way to capture your music in all of its dimension and detail.

The Duet Breakout Box is a durable, aluminum enclosure with 2 1/4” inputs, 2 XLR inputs and 2 balanced XLR outputs. The Duet Breakout Box features studio-quality I/O connectors and includes a 2 meter cable allowing you to extend your connections and minimize cable clutter for the ultimate desktop or mobile recording experience. Coupled with Apogee Duet, the Duet Breakout Box makes capturing brilliant recordings on your iPad, iPhone or Mac easier than ever.