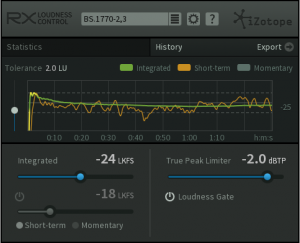 iZotope has just released the award-winning RX Loudness Control. This offline plug-in, part of the RX family of post production products, efficiently analyzes and renders a mix for loudness compliance in faster than real-time, while transparently preserving the dynamics of the mix.

RX Loudness Control automates an historically tedious workflow with the fastest, most transparent, and most accurate processing available today. Audio or video post production professionals working for broadcast can now access intelligent, automatic loudness compliance with just two clicks: one click to analyze audio, and one click to comply.

Built for broadcast facilities across the globe, RX Loudness Control encompasses  extensive presets for the latest and most significant loudness standards-including BS.1770-1-3, EBU R128 s1, and ATSC A/85. Users also have the ability to create and save their own presets for a unique television spec if needed.

A history graph and loudness report inform the user whether audio is within the appropriate tolerance, and if not, illustrates where overflows may be occurring. In order to both document and prove loudness, loudness history can be exported as a CSV spreadsheet.

As a plug-in, RX Loudness Control is a more comprehensive tool than the Loudness module in RX 4. Features include support for surround sound (up to 5.1) and the EBU R128 s1 standard, the ability to generate a .CSV loudness report, availability on the Adobe CC platform and as an AudioSuite DPM/AAX plug-in, and a new and faster loudness algorithm with industry-leading accuracy.

RX Loudness Control is currently compatible in Avid Media Composer, Avid Pro Tools, and Adobe Premiere Pro CC. It was recognized by NewBay Media with a “Best of Show, TV Technology” award at the NAB Show 2015.

RX Loudness Control is available for $349 USD and €325. For international customers, check with your local reseller for pricing information.