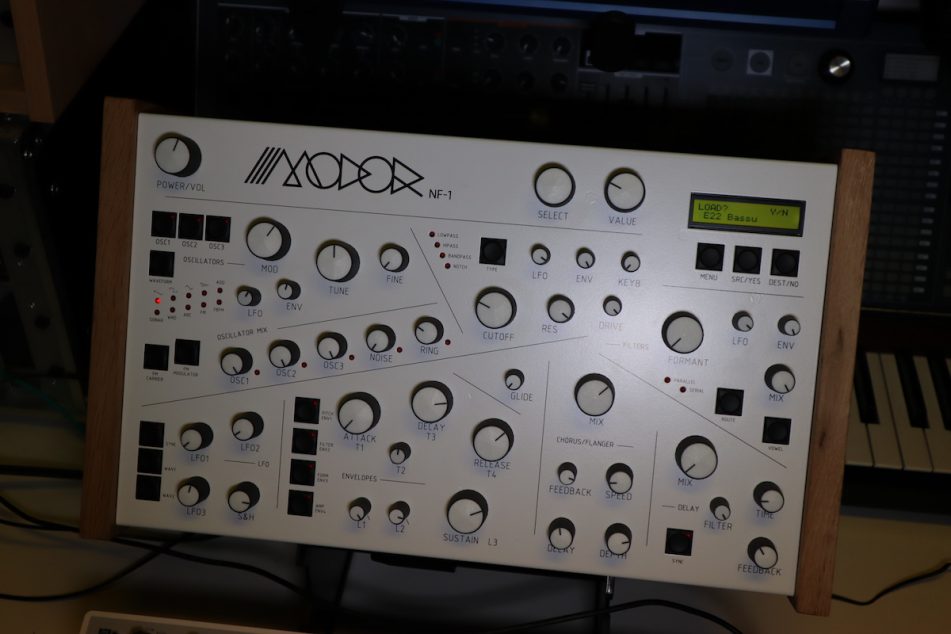 The NF-1 from Modor Music is a bad, polyphonic digital synthesizer, manufactured in Belgium.

This digital desktop synthesizer has, for a digital synth, a fairly unique sound. This is partly due to the special format filter. The NF-1 has two filters that you can switch both parallel and in series.

The first filter is a resonant multimode filter with a slope or -12 dB per octave. It features low-pass, band-pass, high-pass and notch modes. The resonance goes up to self-oscillation. The filter is followed by a great sounding distortion, which provides an aggressive, slightly 303-ish character.

The second filter features a rather unusual design. It is a formant filter, adding a vocal character to sounds by emphasizing certain harmonics, the so-called formants. It’s awesome for pad sounds and for creating “choir” sounds. Combined with the integrated delay effect (see below), it produces funny speech sounds

The NF-1 also has numerous modulation options. You have three LFOs at your disposal, a sample & hold generator and four ADSR-like envelopes.

he NF-1 is equipped with two effect generator, a chorus / flanger and a delay, both with individual control elements and dry / wet knobs.