With its bass heavy, dance oriented grooves and the extensive use of synthesis and digital sampling, electronic music has a large and loyal following. Such is the nature of TYR, whose music has been featured on Billboard’s ‘Next Big Sound’ chart as the #9 fastest accelerating artist across the web. TYR’s music has been well received by genre icon Moby and his following keeps growing. Quality production is central to TYR’s music and the studio reference monitors used during production need to be accurate and robust. That’s precisely why TYR relies on his D5 monitors from San Diego, CA-based Equator Audio. 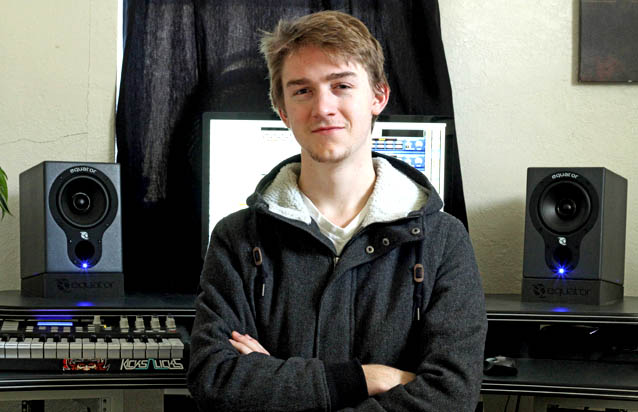 Producer / performer Grant Redmond is the talent behind TYR—both on stage and in the studio. Redmond uses his Equator D5s for a wide range of musical tasks and, in the roughly five months he’s owned them, has been very impressed with their performance. He discussed his experience with the Equator monitors.

“I first learned about Equator monitors from the audio engineer at Finality Mastering in Orange County, CA,” Redmond reports. The Equators are the primary mixing and production monitors in my studio. Resting on a pair of Equator isolation pads, I use these speakers for every aspect of production—from recording vocals or instruments to synth creation, sound design, structure, and mixdown.”

“The D5s are, without a doubt, the cleanest sounding monitors I’ve heard,” Redmond adds, “I love the fact that, unlike other monitor speakers I’ve tried, they don’t cause ear fatigue. I can sit back and produce on them all day at volume without straining my ears. Their coaxial design creates such a clear sound, with no midrange distortion, that I can’t imagine producing without them. I can hear every little detail of a synth sound I’m making and, just as importantly, I can hear exactly where a certain instrument needs to sit in the frequency range when mixing. They really are brilliant monitors. I’m confident in their accuracy when producing on them because I know I’m hearing everything I need to be aware of.”

For anyone involved in music production, quality customer service and technical support is essential. Here too, Redmond was very complimentary of Equator Audio. “Everyone at Equator Audio has been great to deal with,” he says. “Marty Bradley, the company’s general manager has been terrific and it’s easy to get hold of people. Equator is extremely responsive and that makes you feel like a valued customer. I’ve been really pleased.”

As he prepared to go back into the studio, Redmond offered these final thoughts about his Equator monitors, “I couldn’t be happier with my D5’s. They deliver the cleanest and clearest sound of any monitors that are anywhere near the same price range. Unless you can afford to spend thousands of dollars on a single monitor, Equators are the only way to go. Even if you can afford the big buck brands, I think it’s a good idea to have a pair of Equators next to them as a reference, because I really do believe nothing compares. They are the best!”

To learn more about TYR, visit the website at www.tyrmusic.com.