TASCAM’s newest cutting-edge Portastudio—the 2488—was named “Product of the Year” by Music Trades magazine in its April 2004 issue. Debuting at this year’s Winter NAMM conference in January, the 2488 is the latest in TASCAM’s line of Portastudios, offering 24-track/24-bit digital audio at a musician-friendly price point. 2004 marks the 25th anniversary of TASCAM’s first Portastudio introduction—the 144— the world’s first portable four-track cassette recorder. The 2488 also garnered “Desktop Recording Workstation of the Year” from M.I.P.A., whose nominating and voting academy includes 58 music trade magazines from around the world.

“TASCAM virtually invented the home recording market 25 years ago with the Portastudio 144,” says Jim Mack, Director of TASCAM. “On the 25th anniversary of the Portastudio, it’s fitting that we would release a new model that continues to shatter the barrier between professional studios and home recording.”

“The Portastudio ushered in the age of home recording, spawned dozens of competitive products, created a rich commercial opportunity for retailers around the world, and is still going strong.”*

In addition to the two awards bestowed upon the 2488, TASCAM’s US-122 Stereo USB Audio/MIDI Interface was named best “Audio/MIDI Hardware” in Soundcheck magazine’s 2004 poll. 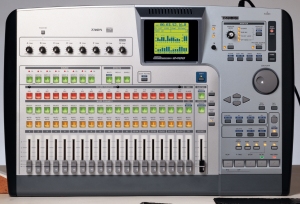