Roland is proud to announce they are now shipping the SP-606–a new-generation sampling workstation that does it all. It combines sampling, phrase sequencing, audio editing, effects, performance tools, computer connectivity, and soft-synthesis into one sleek, user-friendly package.

Pro-quality digital audio can be captured with the SP-606’s 8-voice
sampling engine by recording directly from the built-in stereo inputs and digital input, or via USB for drag & drop WAV/AIF file exchange. Samples can be twisted, sliced, and sculpted internally and/or with the companion PC software (more info below).

Audio loops can be time-stretched and locked to sequences in real time
thanks to the SP-606’s BPM sync control and internal 4-track MIDI
sequencer. Serious audio-processing power is built into the SP-606 in the form of two high-quality effects engines. For polished, radio-ready final mixes, you can tap into the SP-606’s mastering effects. Export your masterpieces with crystal-clear quality via the SP-606’s digital output.

Unprecedented plug-and-play convenience, speed, and massive storage
capacity is possible with the SP-606’s CompactFlash card slot. Over six
hours (!) of audio can be recorded, and WAV and AIF files can be
imported/exported without the need for a separate CompactFlash
reader/writer. Long load times are a thing of the past with the SP-606.

The SP-606 can be used as a full-featured standalone sampler or as a USB companion for the bundled P606 software app (PC compatible, included free with the SP-606). Designed by the creative braintrust at Cakewalk, P606 provides a powerful array of phrase generators, soft synthesizers, and virtual effects — the end results of which can be controlled by or transferred to the SP-606, eliminating the need for a static CD library. Best of all, the SP-606 can seamlessly control, import, edit, and play back tracks created with P606. 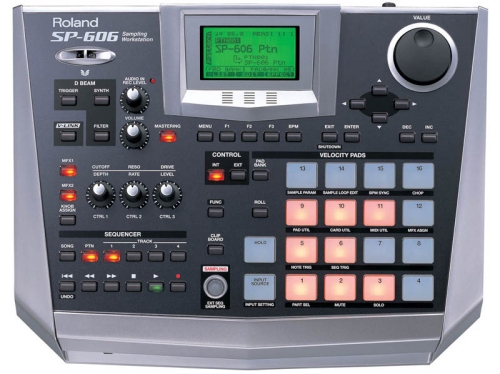