The Vestax PMC-05 ProSL is the classic PMC05 Pro (now Mk3) with a built in sampler.
Featuring as standard 2 channels with high quality faders on both as well as high quality crossfader. 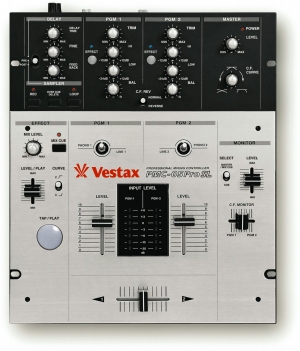 DIGITAL DELAY
A sound with a delay effect remains even after turning off the cross fader, which makes it able to create a delay effect to the scratch sound only. It is also able to set delay times with the TAP button.


SAMPLER
A Maximum 11.9 seconds of sampling is possible when using OVER DUB. Besides pushing the play button to start the sampled sound, it is able to start with a groove by raising the fader. Over dubs are infinite while loop playing a back track that has been sampled once and can as well delete the OVER DUB.
The delay or sampler can also be assigned to the MIC channel.


FOOT SWITCH
A convenient option of using a FOOT SWITCH (sold separately) to start sampling when using both hands in play is possible. For a scratch performance the ON/OFF via the foot switch is a feature used by many. (Separately sold FOOT SWITCH: TASCOM RC-32P)


LEVEL/PLAY FADER with Curve Control Switch The Level fader acts and works as a Play Switch during sampling modes and gives an instant fader start feature when sampling data.