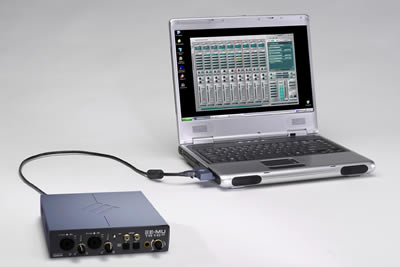 The E-MU PCMCIA card can be used standalone for its DSP power and studio-quality headphone amp, or plugged into the MicroDock for a total of 16 inputs and 16 outputs plus MIDI I/O, including two custom preamps with Neutrik connectors, 48V phantom power, and analog soft limiting circuit for clip protection.

E-MU’s CardBus Digital Audio Systems ship with ASIO2 and WDM drivers for Windows XP and 2000, as well as the new Production Tools software bundle that includes E-MU’s Proteus X LE, as well as software by Steinberg, Ableton, IK Multimedia, and many more – everything you need to create, record, edit, master and burn your music.