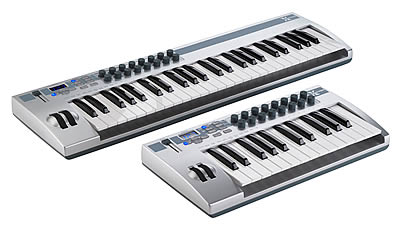 The Xboard Control software provides an intuitive desktop interface that lets you effortlessly create custom templates for all of your favorite hardware and software instruments.

The Xboards also allow you to set discrete MIDI channels for each controller and offer unrivalled real-time control and performance features, including Snap Shot that lets you send multiple program changes and controller values by pressing a single button, and Xboard Latch Mode that enables you to define a section of the keyboard as on/off triggers – perfect for drum loops.

Both Xboard models are ultra-portable and perfect for the studio and stage, and can run on USB, battery, or AC power.

The Xboard 25 and Xboard 49 Professional USB/MIDI Controllers will ship April 2005.